We will consider experiment data from a study that sought to understand the effect of race and sex on job application callback rates (Bertrand and Mullainathan 2003). To evaluate which factors were important, job postings were identified in Boston and Chicago for the study, and researchers created many fake resumes to send off to these jobs to see which would elicit a callback.110 The researchers enumerated important characteristics, such as years of experience and education details, and they used these characteristics to randomly generate fake resumes. Finally, they randomly assigned a name to each resume, where the name would imply the applicant’s sex and race.

The resume data can be found in the openintro R package.

The first names that were used and randomly assigned in this experiment were selected so that they would predominantly be recognized as belonging to Black or White individuals; other races were not considered in this study. While no name would definitively be inferred as pertaining to a Black individual or to a White individual, the researchers conducted a survey to check for racial association of the names; names that did not pass this survey check were excluded from usage in the experiment. You can find the full set of names that did pass the survey test and were ultimately used in the study in Table 9.1. For example, Lakisha was a name that their survey indicated would be interpreted as a Black woman, while Greg was a name that would generally be interpreted to be associated with a White male.

The response variable of interest is whether there was a callback from the employer for the applicant, and there were 8 attributes that were randomly assigned that we’ll consider, with special interest in the race and sex variables. Race and sex are protected classes in the United States, meaning they are not legally permitted factors for hiring or employment decisions. The full set of attributes considered is provided in Table 9.2.

All of the attributes listed on each resume were randomly assigned. This means that no attributes that might be favorable or detrimental to employment would favor one demographic over another on these resumes. Importantly, due to the experimental nature of this study, we can infer causation between these variables and the callback rate, if substantial differences are found. Our analysis will allow us to compare the practical importance of each of the variables relative to each other.

9.2 Modelling the probability of an event

Logistic regression is a generalized linear model where the outcome is a two-level categorical variable. The outcome, \(Y_i\), takes the value 1 (in our application, this represents a callback for the resume) with probability \(p_i\) and the value 0 with probability \(1 - p_i\). Because each observation has a slightly different context, e.g., different education level or a different number of years of experience, the probability \(p_i\) will differ for each observation. Ultimately, it is this probability that we model in relation to the predictor variables: we will examine which resume characteristics correspond to higher or lower callback rates.

Notation for a logistic regression model. 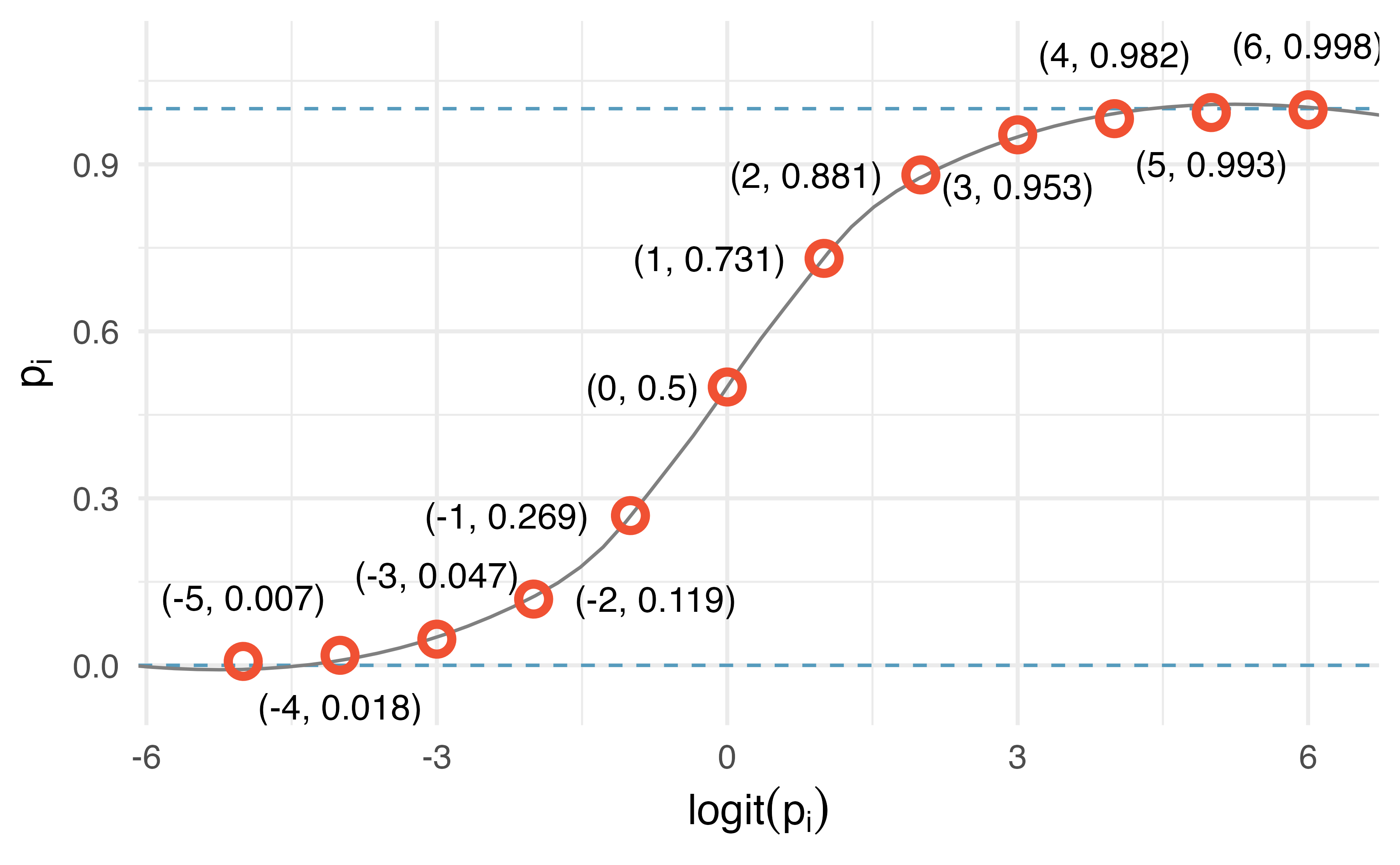 In our resume example, there are 8 predictor variables, so \(k = 8\). While the precise choice of a logit function isn’t intuitive, it is based on theory that underpins generalized linear models, which is beyond the scope of this book. Fortunately, once we fit a model using software, it will start to feel like we are back in the multiple regression context, even if the interpretation of the coefficients is more complex.

To convert from values on the logistic regression scale to the probability scale, we need to back transform and then solve for \(p_i\):

As with most applied data problems, we substitute the point estimates for the parameters (the \(b_i\)) so that we can make use of this formula.

We start by fitting a model with a single predictor: honors. This variable indicates whether the applicant had any type of honors listed on their resume, such as employee of the month. A logistic regression model was fit using statistical software and the following model was found:

While knowing whether a resume listed honors provides some signal when predicting whether the employer would call, we would like to account for many different variables at once to understand how each of the different resume characteristics affected the chance of a callback.

9.3 Logistic model with many variables

We used statistical software to fit the logistic regression model with all 8 predictors described in Table 9.2. Like multiple regression, the result may be presented in a summary table, which is shown in Table 9.3.

Just like multiple regression, we could trim some variables from the model. Here we’ll use a statistic called Akaike information criterion (AIC), which is analogous to how we used adjusted \(R^2\) in multiple regression. AIC is a popular model selection method used in many disciplines, and is praised for its emphasis on model uncertainty and parsimony. AIC selects a “best” model by ranking models from best to worst according to their AIC values. In the calculation of a model’s AIC, a penalty is given for including additional variables. This penalty for added model complexity attempts to strike a balance between underfitting (too few variables in the model) and overfitting (too many variables in the model). When using AIC for model selection, models with a lower AIC value are considered to be “better.” Remember that when using adjusted \(R^2\) we select models with higher values instead. It is important to note that AIC provides information about the quality of a model relative to other models, but does not provide information about the overall quality of a model.

We will look for models with a lower AIC using a backward elimination strategy. After using this criteria, the variable college_degree is eliminated, giving the smaller model summarized in Table 9.4, which is what we’ll rely on for the remainder of this section.

The race variable had taken only two levels: Black and White. Based on the model results, what does the coefficient of this variable say about callback decisions?

The coefficient of \(\texttt{race}_{\texttt{White}}\) in the full model in Table 9.3, is nearly identical to the model shown in Table 9.4. The predictors in this experiment were thoughtfully laid out so that the coefficient estimates would typically not be much influenced by which other predictors were in the model, which aligned with the motivation of the study to tease out which effects were important to getting a callback. In most observational data, it’s common for point estimates to change a little, and sometimes a lot, depending on which other variables are included in the model.

Use the model summarized in Table 9.4 to estimate the probability of receiving a callback for a job in Chicago where the candidate lists 14 years experience, no honors, no military experience, includes an email address, and has a first name that implies they are a White male.

We can start by writing out the equation using the coefficients from the model:

Now we can add in the corresponding values of each variable for this individual:

Compute the probability of a callback for an individual with a name commonly inferred to be from a Black male but who otherwise has the same characteristics as the one described in the previous example.

We can complete the same steps for an individual with the same characteristics who is Black, where the only difference in the calculation is that the indicator variable \(\texttt{race}_{\texttt{White}}\) will take a value of 0. Doing so yields a probability of 0.0553. Let’s compare the results with those of the previous example..

What we have quantified in this section is alarming and disturbing. However, one aspect that makes this racism so difficult to address is that the experiment, as well-designed as it is, cannot send us much signal about which employers are discriminating. It is only possible to say that discrimination is happening, even if we cannot say which particular callbacks — or non-callbacks — represent discrimination. Finding strong evidence of racism for individual cases is a persistent challenge in enforcing anti-discrimination laws.

Any form of discrimination is concerning, and this is why we decided it was so important to discuss this topic using data. The resume study also only examined discrimination in a single aspect: whether a prospective employer would call a candidate who submitted their resume. There was a 50% higher barrier for resumes simply when the candidate had a first name that was perceived to be from a Black individual. It’s unlikely that discrimination would stop there.

Let’s consider a sex-imbalanced company that consists of 20% women and 80% men, and we’ll suppose that the company is very large, consisting of perhaps 20,000 employees. (A more thoughtful example would include more inclusive gender identities.) Suppose when someone goes up for promotion at this company, 5 of their colleagues are randomly chosen to provide feedback on their work.

Who is discriminated against more at the company, men or women?

Let’s suppose we took 100 men who have gone up for promotion in the past few years. For these men, \(5 \times 100 = 500\) random colleagues will be tapped for their feedback, of which about 20% will be women (100 women). Of these 100 women, 10 are expected to be biased against the man they are reviewing. Then, of the 500 colleagues reviewing them, men will experience discrimination by about 2% of their colleagues when they go up for promotion.

This example highlights something profound: even in a hypothetical setting where each demographic has the same degree of prejudice against the other demographic, the smaller group experiences the negative effects more frequently. Additionally, if we would complete a handful of examples like the one above with different numbers, we would learn that the greater the imbalance in the population groups, the more the smaller group is disproportionately impacted.111

Of course, there are other considerable real-world omissions from the hypothetical example. For example, studies have found instances where people from an oppressed group also discriminate against others within their own oppressed group. As another example, there are also instances where a majority group can be oppressed, with apartheid in South Africa being one such historic example. Ultimately, discrimination is complex, and there are many factors at play beyond the mathematics property we observed in the previous example.

We close this chapter on this serious topic, and we hope it inspires you to think about the power of reasoning with data. Whether it is with a formal statistical model or by using critical thinking skills to structure a problem, we hope the ideas you have learned will help you do more and do better in life.

Logistic and linear regression models have many similarities. The strongest of which is the linear combination of the explanatory variables which is used to form predictions related to the response variable. However, with logistic regression, the response variable is binary and therefore a prediction is given on the probability of a successful event. Logistic model fit and variable selection can be carried out in similar ways as multiple linear regression.

Answers to odd numbered exercises can be found in Appendix A.9.