In Section 17 our focus was on the difference in proportions, a statistic calculated from finding the success proportions (from the binary response variable) measured across two groups (the binary explanatory variable). As we will see in the examples below, sometimes the explanatory or response variables have more than two possible options. In that setting, a difference across two groups is not sufficient, and the proportion of “success” is not well defined if there are 3 or 4 or more possible response levels. The primary way to summarize categorical data where the explanatory and response variables both have 2 or more levels is through a two-way table as in Table 18.1.

Note that with two-way tables, there is not an obvious single parameter of interest. Instead, research questions usually focus on how the proportions of the response variable changes (or not) across the different levels of the explanatory variable. Because there is not a population parameter to estimate, bootstrapping to find the standard error of the estimate is not meaningful. As such, for two-way tables, we will focus on the randomization test and corresponding mathematical approximation (and not bootstrapping).

We all buy used products – cars, computers, textbooks, and so on – and we sometimes assume the sellers of those products will be forthright about any underlying problems with what they’re selling. This is not something we should take for granted. Researchers recruited 219 participants in a study where they would sell a used iPod176 that was known to have frozen twice in the past. The participants were incentivized to get as much money as they could for the iPod since they would receive a 5% cut of the sale on top of $10 for participating. The researchers wanted to understand what types of questions would elicit the seller to disclose the freezing issue.

Unbeknownst to the participants who were the sellers in the study, the buyers were collaborating with the researchers to evaluate the influence of different questions on the likelihood of getting the sellers to disclose the past issues with the iPod. The scripted buyers started with “Okay, I guess I’m supposed to go first. So you’ve had the iPod for 2 years …” and ended with one of three questions:

The question is the treatment given to the sellers, and the response is whether the question prompted them to disclose the freezing issue with the iPod. The results are shown in Table 18.1, and the data suggest that asking the, What problems does it have?, was the most effective at getting the seller to disclose the past freezing issues. However, you should also be asking yourself: could we see these results due to chance alone if there really is no difference in the question asked, or is this in fact evidence that some questions are more effective for getting at the truth?

The ask data can be found in the openintro R package.

The hypothesis test for the iPod experiment is really about assessing whether there is convincing evidence that there was a difference in the success rates that each question had on getting the participant to disclose the problem with the iPod. In other words, the goal is to check whether the buyer’s question was independent of whether the seller disclosed a problem.

While we would not expect the number of disclosures to be exactly the same across the three question classes, the rate of disclosure seems substantially different across the three groups. In order to investigate whether the differences in rates is due to natural variability in people’s honesty or due to a treatment effect (i.e., the question causing the differences), we need to compute estimated counts for each cell in a two-way table.

We would predict that \(0.2785 \times 73 = 20.33\) sellers would disclose the problem. Obviously we observed fewer than this, though it is not yet clear if that is due to chance variation or whether that is because the questions vary in how effective they are at getting to the truth.

If the questions were actually equally effective, meaning about 27.85% of respondents would disclose the freezing issue regardless of what question they were asked, about how many sellers would we expect to hide the freezing problem from the Positive Assumption group?177

We can compute the expected number of sellers who we would expect to disclose or hide the freezing issue for all groups, if the questions had no impact on what they disclosed, using the same strategies employed in the previous Example and Guided Practice to compute expected counts. These expected counts were used to construct Table 18.2, which is the same as Table 18.1, except now the expected counts have been added in parentheses.

The examples and exercises above provided some help in computing expected counts. In general, expected counts for a two-way table may be computed using the row totals, column totals, and the table total. For instance, if there was no difference between the groups, then about 27.85% of each row should be in the first column:

Looking back to how 0.2785 was computed – as the fraction of sellers who disclosed the freezing issue \((158/219)\) – these three expected counts could have been computed as

This leads us to a general formula for computing expected counts in a two-way table when we would like to test whether there is strong evidence of an association between the column variable and row variable.

Adding the computed value for each cell gives the chi-squared test statistic \(X^2:\)

Is 40.13 a big number? That is, does it indicate that the observed and expected values are really different? Or is 40.13 a value of the statistic that we would expect to see just due to natural variability? Previously, we applied the randomization test to the setting where the research question investigated a difference in proportions. The same idea of shuffling the data under the null hypothesis can be used in the setting of the two-way table.

18.1.3 Variability of the statistic

Assuming that the individuals would disclose or hide the problems regardless of the question they are given (i.e., that the null hypothesis is true), we can randomize the data by reassigning the 61 disclosed problems and 158 hidden problems to the three groups at random. Table 18.3 shows a possible randomization of the observed data under the condition that the null hypothesis is true (in contrast to the original observed data in Table 18.1).

Adding the computed value for each cell gives the chi-squared test statistic \(X^2:\)

As before, one randomization will not be sufficient for understanding if the observed data are particularly different from the expected chi-squared statistics when \(H_0\) is true. To investigate whether 40.13 is large enough to indicate the observed and expected counts are substantially different, we need to understand the variability in the values of the chi-squared statistic we would expect to see if the null hypothesis was true. Figure 18.1 plots 1,000 chi-squared statistics generated under the null hypothesis. We can see that the observed value is so far from the null statistics that the simulated p-value is zero. That is, the probability of seeing the observed statistic when the null hypothesis is true is virtually zero. In this case we can conclude that the decision of whether to disclose the iPod’s problem is changed by the question asked. We use the causal language of “changed” because the study was an experiment. Note that with a chi-squared test, we only know that the two variables (question_class and response) are related (i.e., not independent). We are not able to claim which type of question causes which type of response. 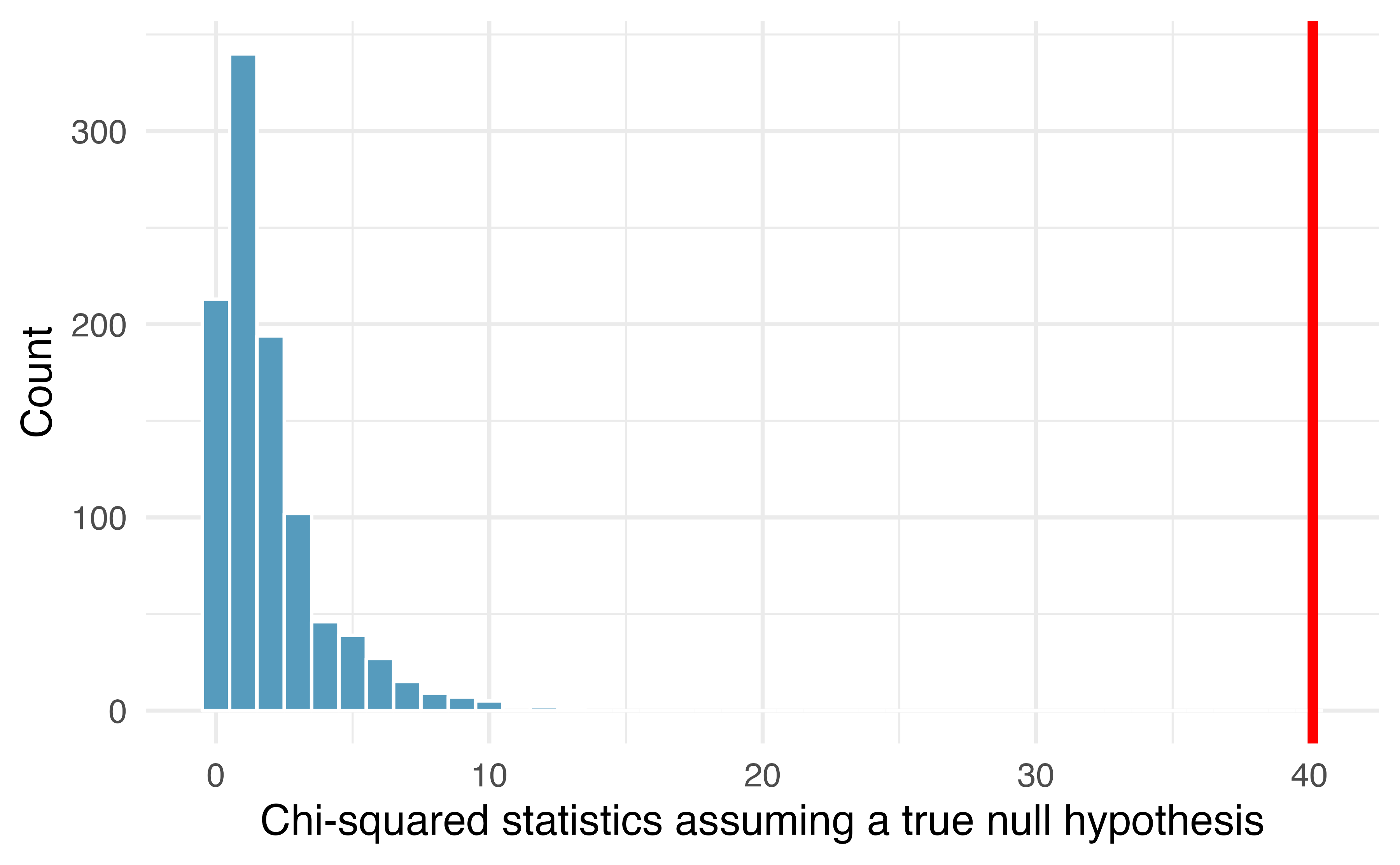 18.2 Mathematical model for test of independence

18.2.1 The chi-squared test of independence 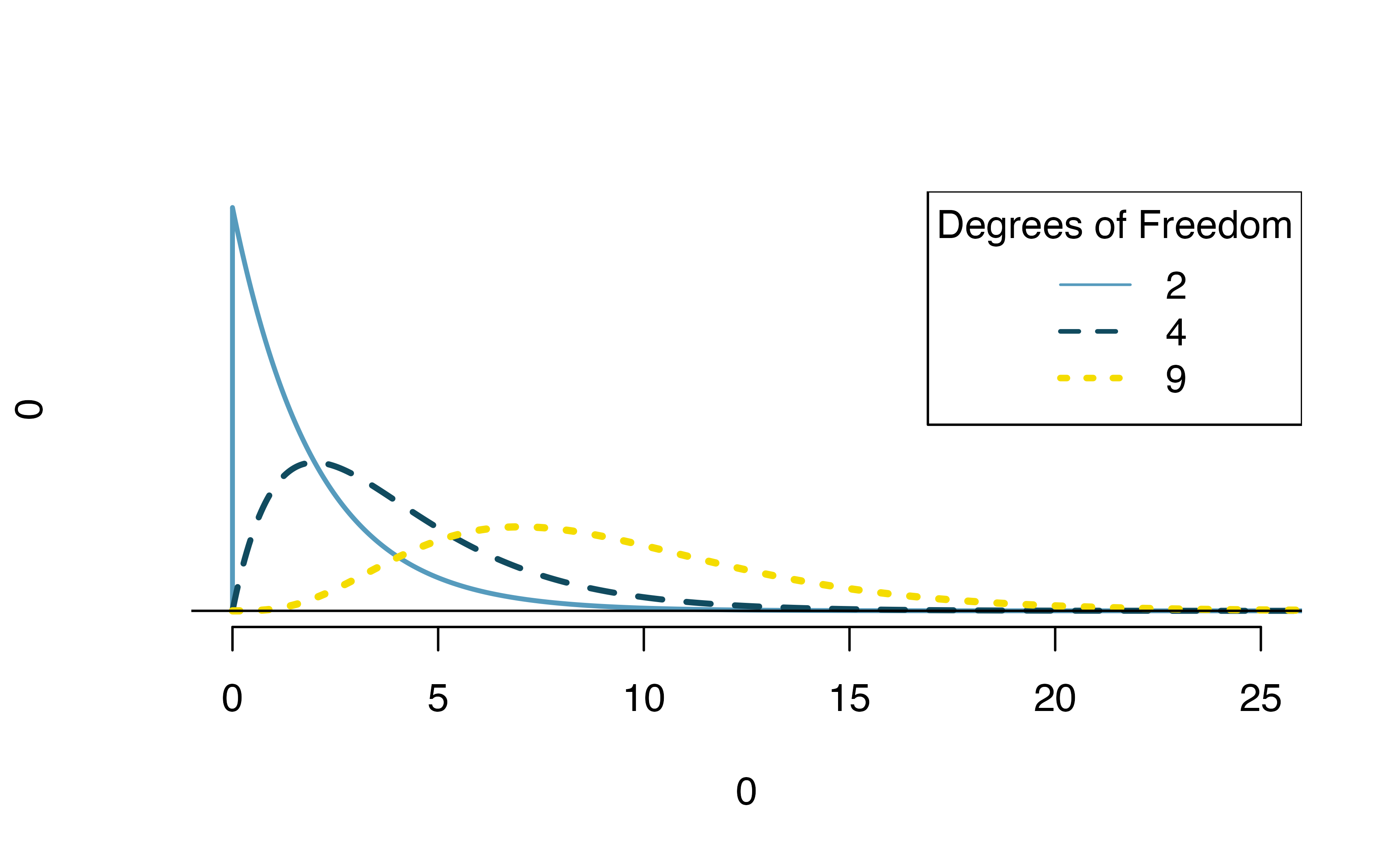 18.2.2 Variability of the chi-squared statistic

The test statistic for assessing the independence between two categorical variables is a \(X^2.\)

To bring it back to the example, we can safely assume that the observations are independent, as the question groups were randomly assigned. Additionally, there are over 5 expected counts in each cell, so the conditions for using the Chi-square distribution are met. If the null hypothesis is true (i.e., the questions had no impact on the sellers in the experiment), then the test statistic \(X^2 = 40.13\) is expected to follow a Chi-squared distribution with 2 degrees of freedom. Using this information, we can compute the p-value for the test, which is depicted in Figure 18.3.

Computing degrees of freedom for a two-way table. 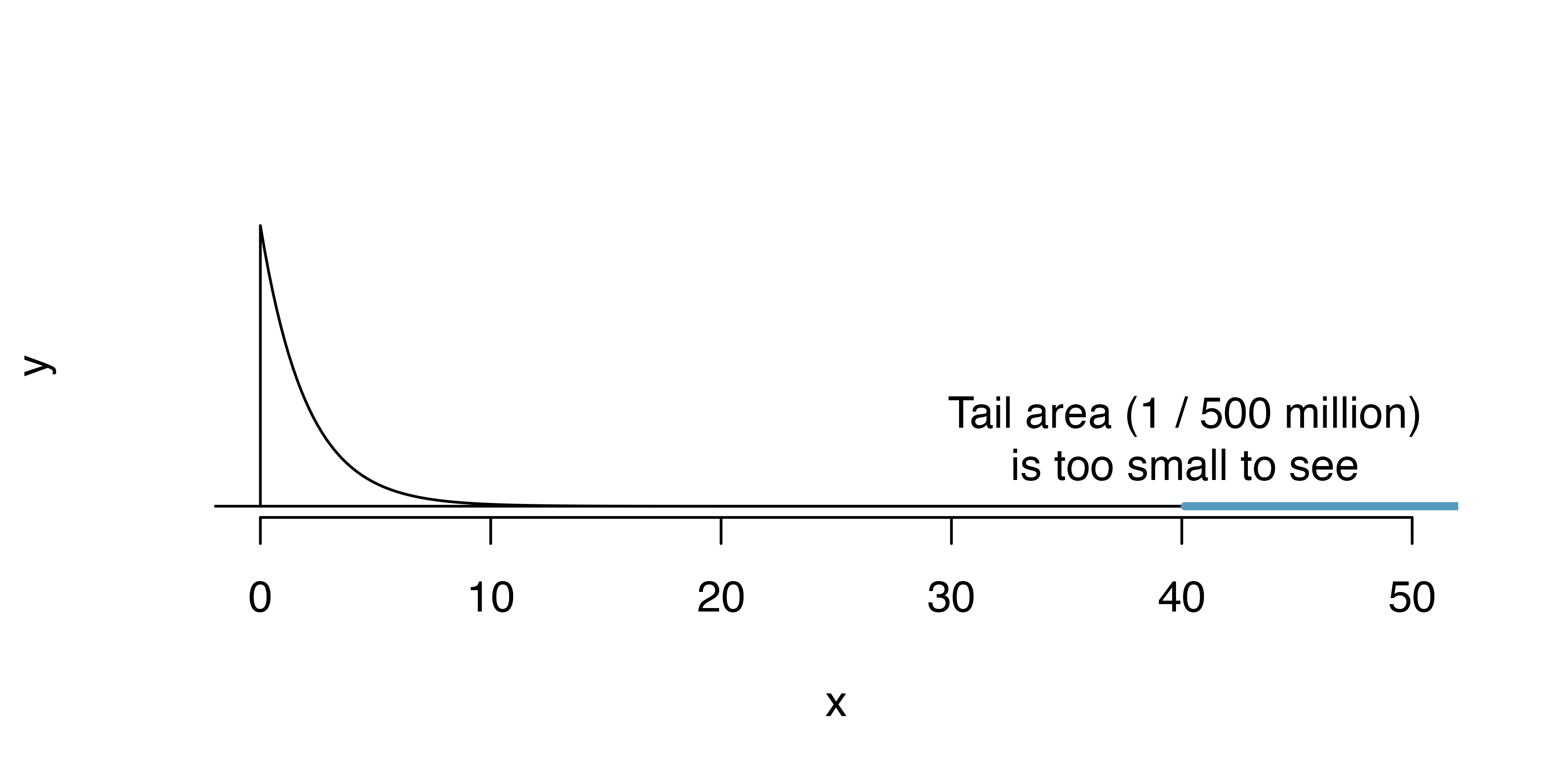 The software R can be used to find the p-value with the function pchisq(). Just like pnorm(), pchisq() always gives the area to the left of the cutoff value. Because, in this example, the p-value is represented by the area to the right of 40.13, we subtract the output of pchisq() from 1.

Find the p-value and draw a conclusion about whether the question affects the sellers likelihood of reporting the freezing problem.

Using a significance level of \(\alpha=0.05,\) the null hypothesis is rejected since the p-value is smaller. That is, the data provide convincing evidence that the question asked did affect a seller’s likelihood to tell the truth about problems with the iPod.

Table 18.4 summarizes the results of an experiment evaluating three treatments for Type 2 Diabetes in patients aged 10-17 who were being treated with metformin. The three treatments considered were continued treatment with metformin (met), treatment with metformin combined with rosiglitazone (rosi), or a lifestyle intervention program. Each patient had a primary outcome, which was either lacked glycemic control (failure) or did not lack that control (success). What are appropriate hypotheses for this test?

The diabetes2 data can be found in the openintro R package.

Typically we will use a computer to do the computational work of finding the chi-squared statistic. However, it is always good to have a sense for what the computer is doing, and in particular, calculating the values which would be expected if the null hypothesis is true can help to understand the null hypothesis claim. Additionally, comparing the expected and observed values by eye often gives the researcher some insight into why or why not the null hypothesis for a given test is rejected or not.

A chi-squared test for a two-way table may be used to test the hypotheses in the diabetes Example above. To get a sense for the statistic used in the chi-squared test, first compute the expected values for each of the six table cells.178

Note, when analyzing 2-by-2 contingency tables (that is, when both variables only have two possible options), one guideline is to use the two-proportion methods introduced in Chapter 17.

In this chapter we extended the randomization / bootstrap / mathematical model paradigm to research questions involving categorical variables. We continued working with one population proportion as well as the difference in populations proportions, but the test of independence allowed for hypothesis testing on categorical variables with more than two levels. We note that the normal model was an excellent mathematical approximation to the sampling distribution of sample proportions (or differences in sample proportions), but that the questions with categorical variables with more than 2 levels required a new mathematical model, the chi-squared distribution. As seen in Chapters 11, 12 and 13, almost all the research questions can be approached using computational methods (e.g., randomization tests or bootstrapping) or using mathematical models. We continue to emphasize the importance of experimental design in making conclusions about research claims. In particular, recall that variability can come from different sources (e.g., random sampling vs. random allocation, see Figure 2.8).

Answers to odd numbered exercises can be found in Appendix A.18.