In Chapter 20 analysis was done to compare the average population value across two different groups. Recall that one of the important conditions in doing a two-sample analysis is that the two groups are independent. Here, independence across groups means that knowledge of the observations in one group doesn’t change what we’d expect to happen in the other group. But what happens if the groups are dependent? Sometimes dependency is not something that can be addressed through a statistical method. However, a particular dependency, pairing, can be modeled quite effectively using many of the same tools we have already covered in this text.

Paired data represent a particular type of experimental structure where the analysis is somewhat akin to a one-sample analysis (see Chapter 19) but has other features that resemble a two-sample analysis (see Chapter 20). As with a two-sample analysis, quantitative measurements are made on each of two different levels of the explanatory variable. However, because the observational unit is paired across the two groups, the two measurements are subtracted such that only the difference is retained. Table 21.1 presents some examples of studies where paired designs were implemented.

It is worth noting that if mathematical modeling is chosen as the analysis tool, paired data inference on the difference in measurements will be identical to the one-sample mathematical techniques described in Chapter 19. However, recall from Chapter 19 that with pure one-sample data, the computational tools for hypothesis testing are not easy to implement and were not presented (although the bootstrap was presented as a computational approach for constructing a one sample confidence interval). With paired data, the randomization test fits nicely with the structure of the experiment and is presented here.

Consider an experiment done to measure whether tire brand Smooth Turn or tire brand Quick Spin has longer tread wear (in cm). That is, after 1,000 miles on a car, which brand of tires has more tread, on average?

The Smooth Turn manufacturer looks at the box plot and says:

Clearly the tread on Smooth Turn tires is higher, on average, than the tread on Quick Spin tires after 1,000 miles of driving.

The Quick Spin manufacturer is skeptical and retorts:

But with only 25 cars, it seems that the variability in road conditions (sometimes one tire hits a pothole, etc.) could be what leads to the small difference in average tread amount. 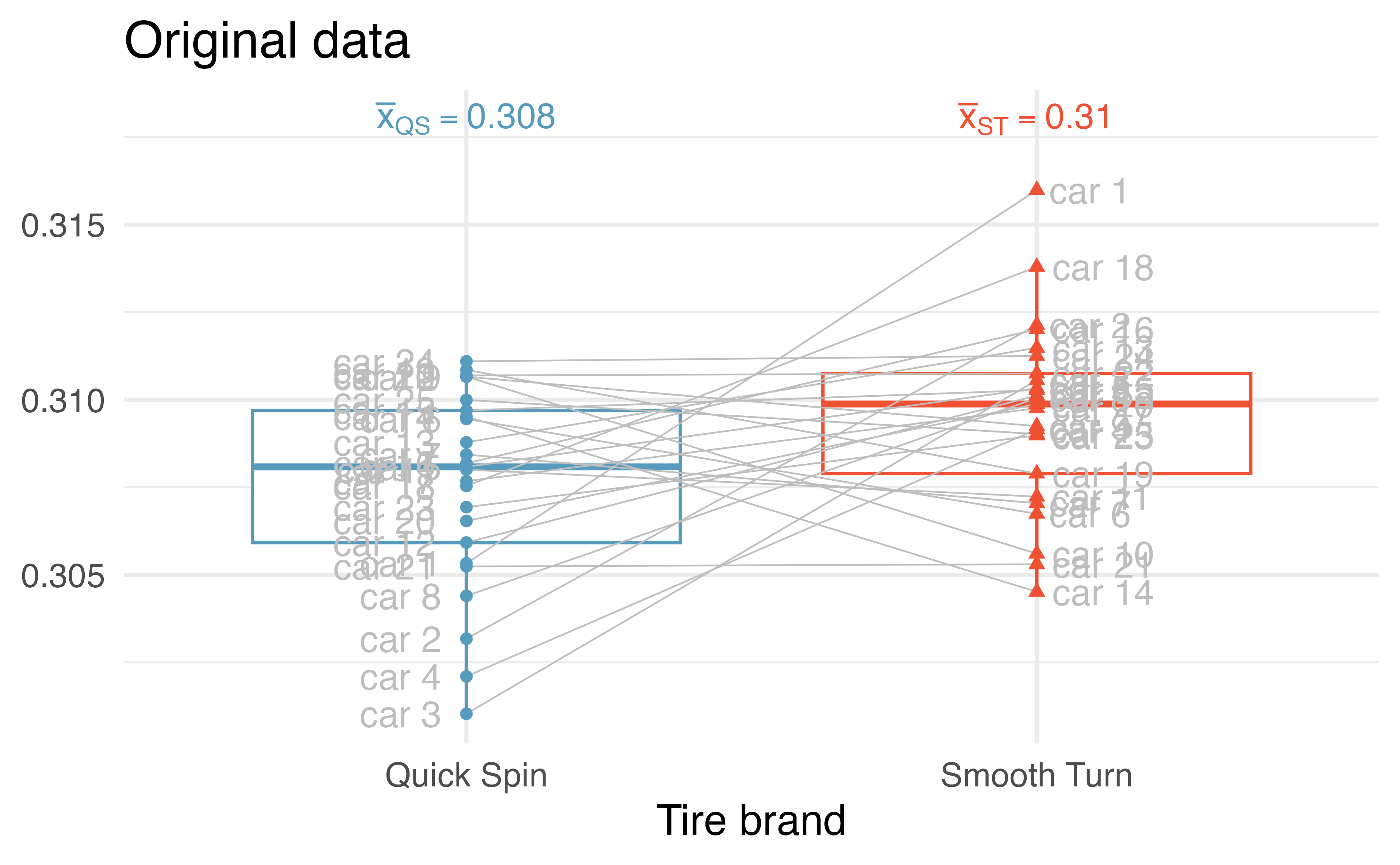 Figure 21.1: Boxplots of the tire tread data (in cm) and the brand of tire from which the original measurements came.

21.1.2 Variability of the statistic

A randomization test will identify whether the differences seen in the box plot of the original data in Figure 21.1 could have happened just by chance variability. As before, we will simulate the variability in the study under the assumption that the null hypothesis is true. In this study, the null hypothesis is that average tire tread wear is the same across Smooth Turn and Quick Spin tires.

When observations are paired, the randomization process randomly assigns the tire brand to each of the observed tread values. Note that in the randomization test for the two-sample mean setting (see Section 20.1) the explanatory variable was also randomly assigned to the responses. The change in the paired setting, however, is that the assignment happens within an observational unit (here, a car). Remember, if the null hypothesis is true, it will not matter which brand is put on which tire because the overall tread wear will be the same across pairs. 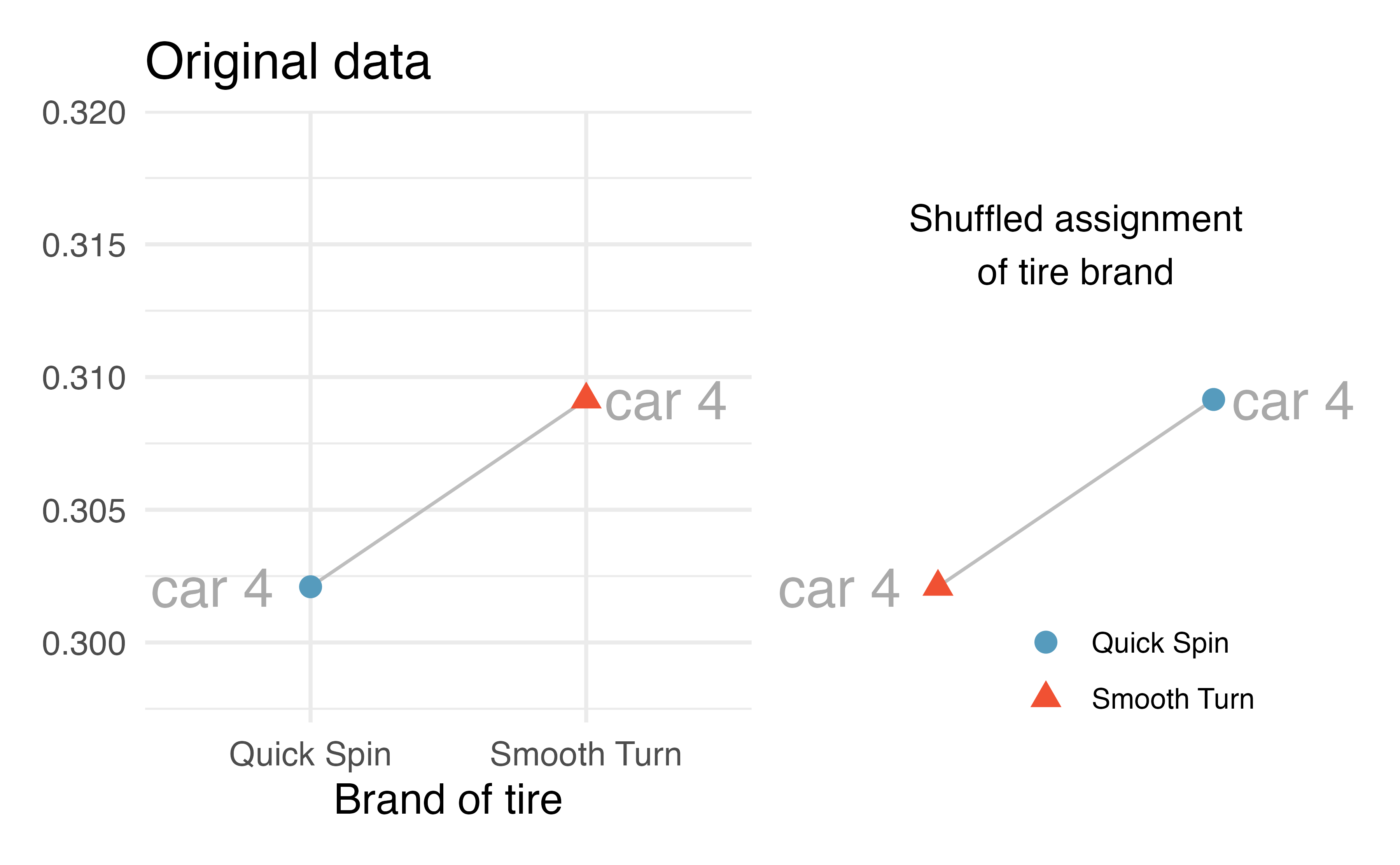 Figure 21.2: The 4th car: the tire brand was randomly permuted, and in the randomization calculation, the measurements (in cm) ended up in different groups. 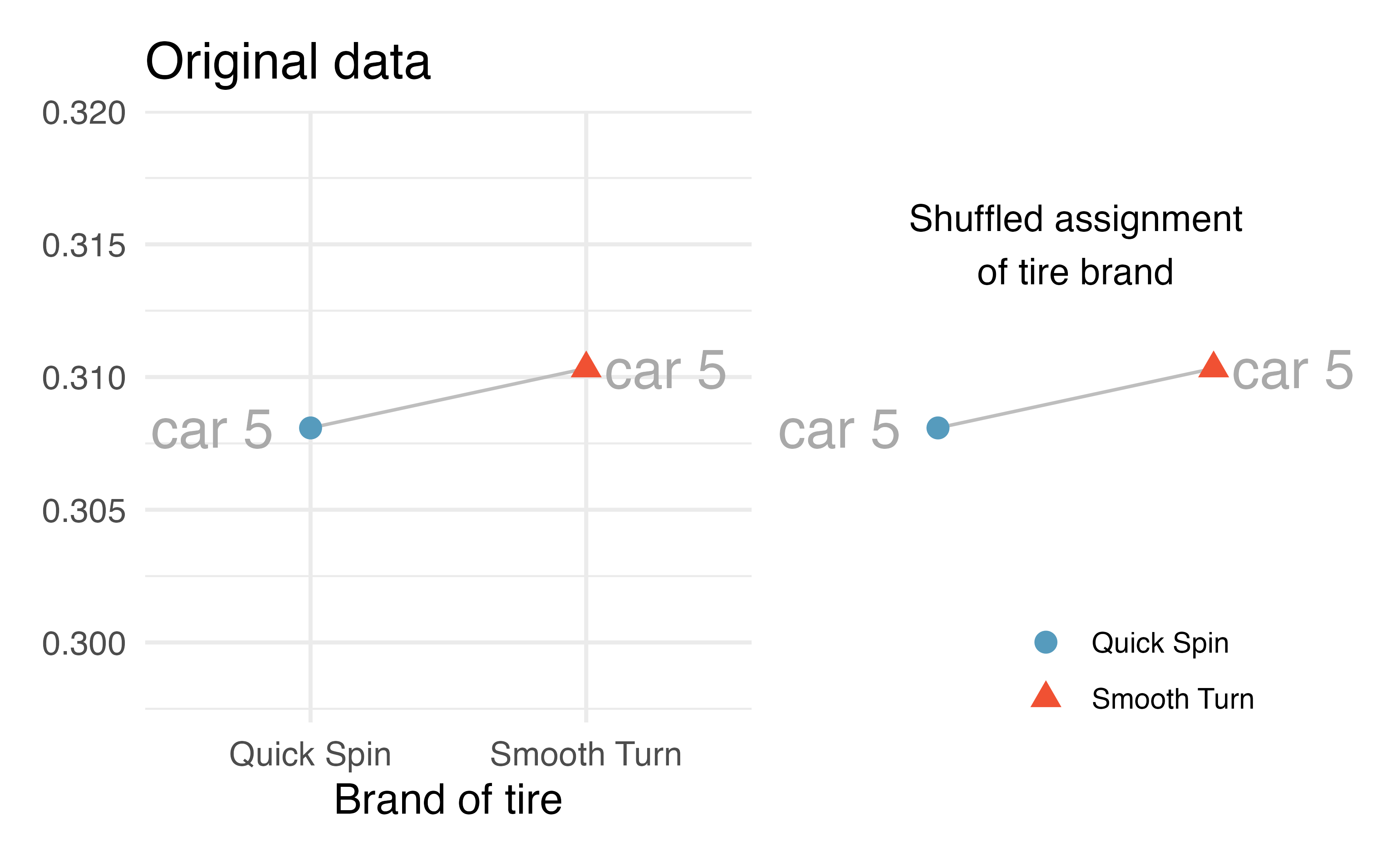 Figure 21.3: The 5th car: the tire brand was randomly permuted to stay the same! In the randomization calculation, the measurements (in cm) ended up in the original groups.

We can put the shuffled assignments for all the cars into one plot as seen in Figure 21.4. 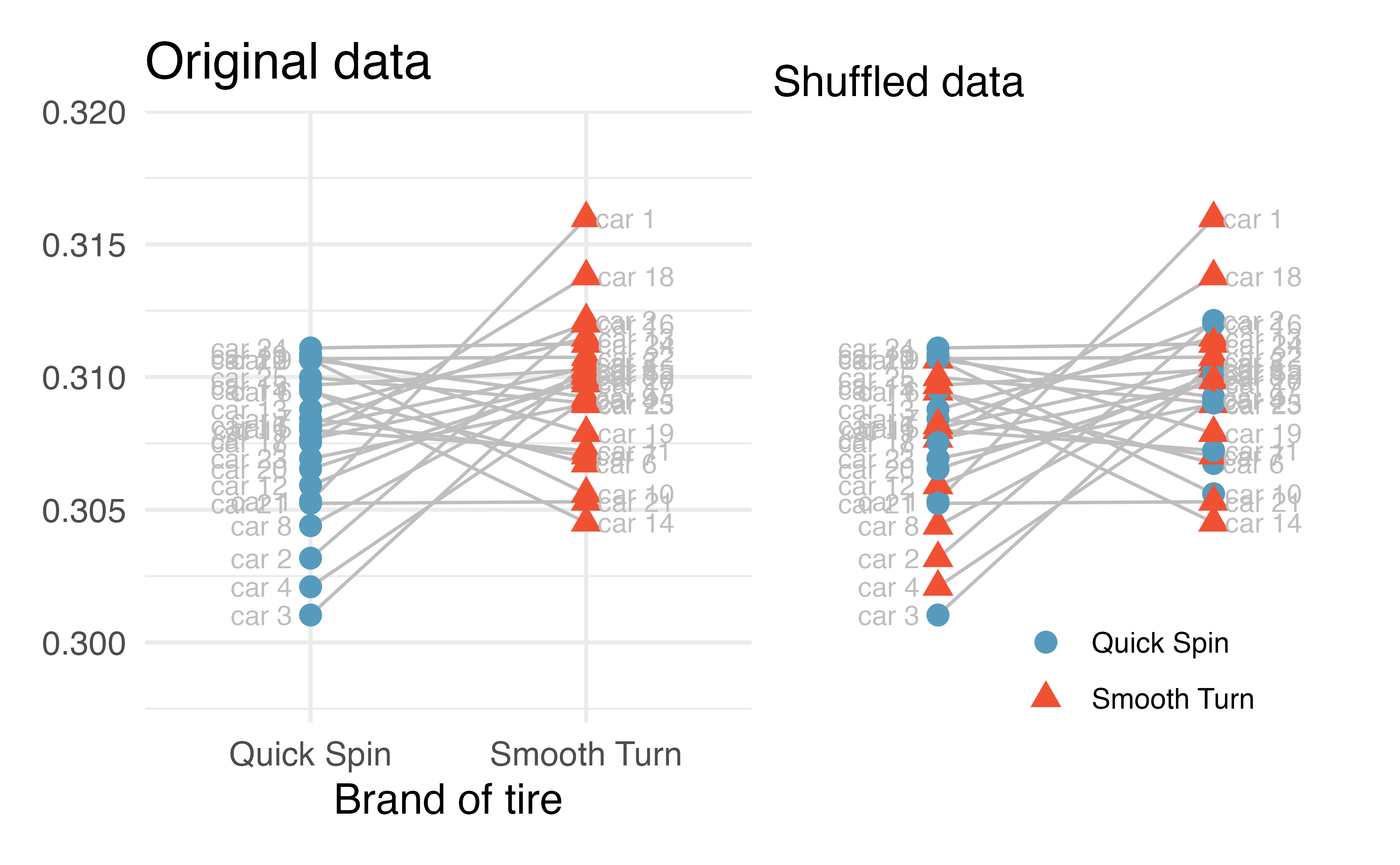 Figure 21.4: Tire tread data (in cm) with: the brand of tire from which the original measurements came (left) and shuffled brand assignment (right). As evidenced by the colors, some of the cars kept their original tire assignments and some cars swapped the tire assignments. 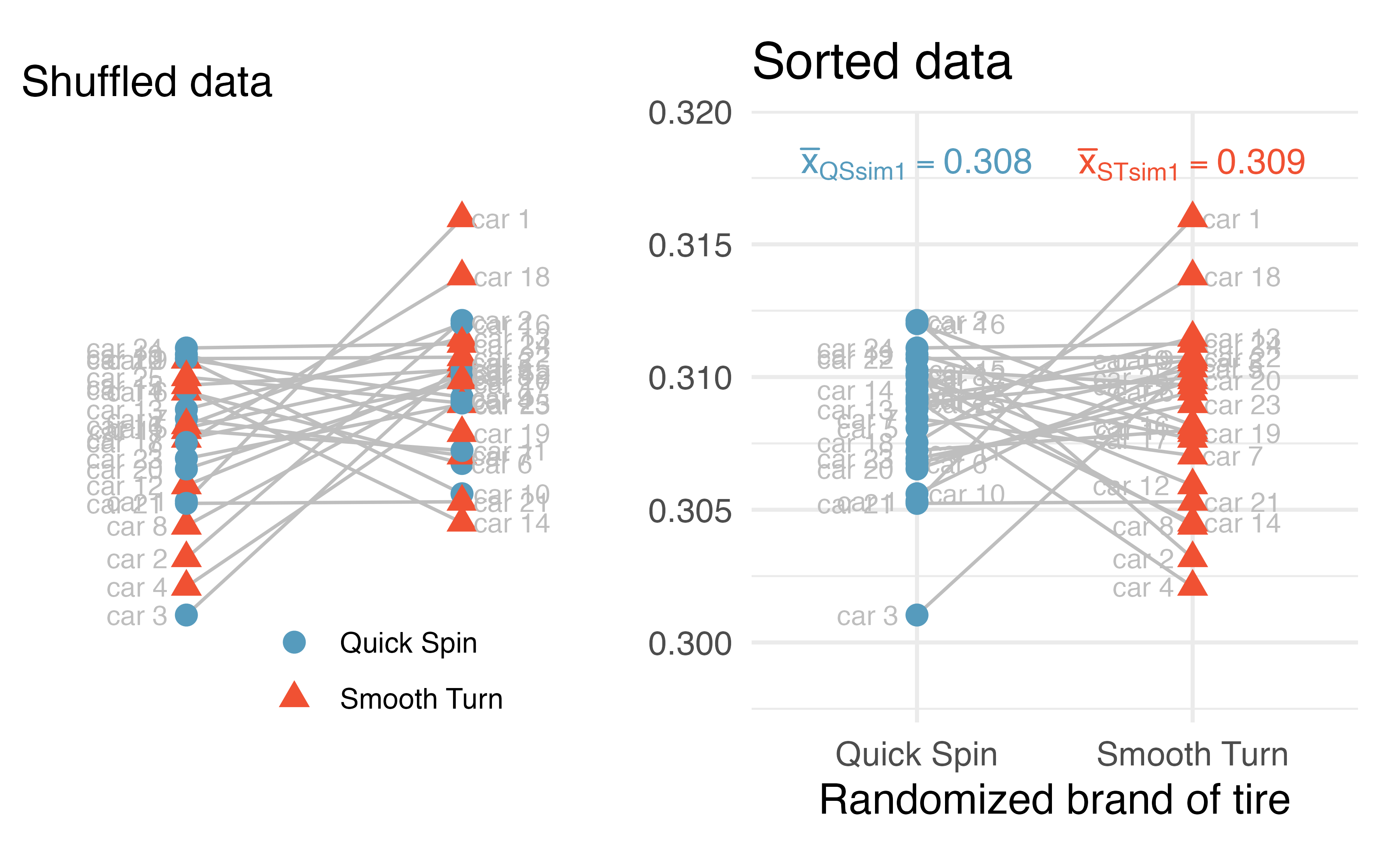 Figure 21.6 presents a second randomization of the data. Notice how the two observations from the same car are linked by a grey line; some of the tread values have been randomly assigned to the opposite tire brand than they were originally (while some are still connected to their original tire brands). 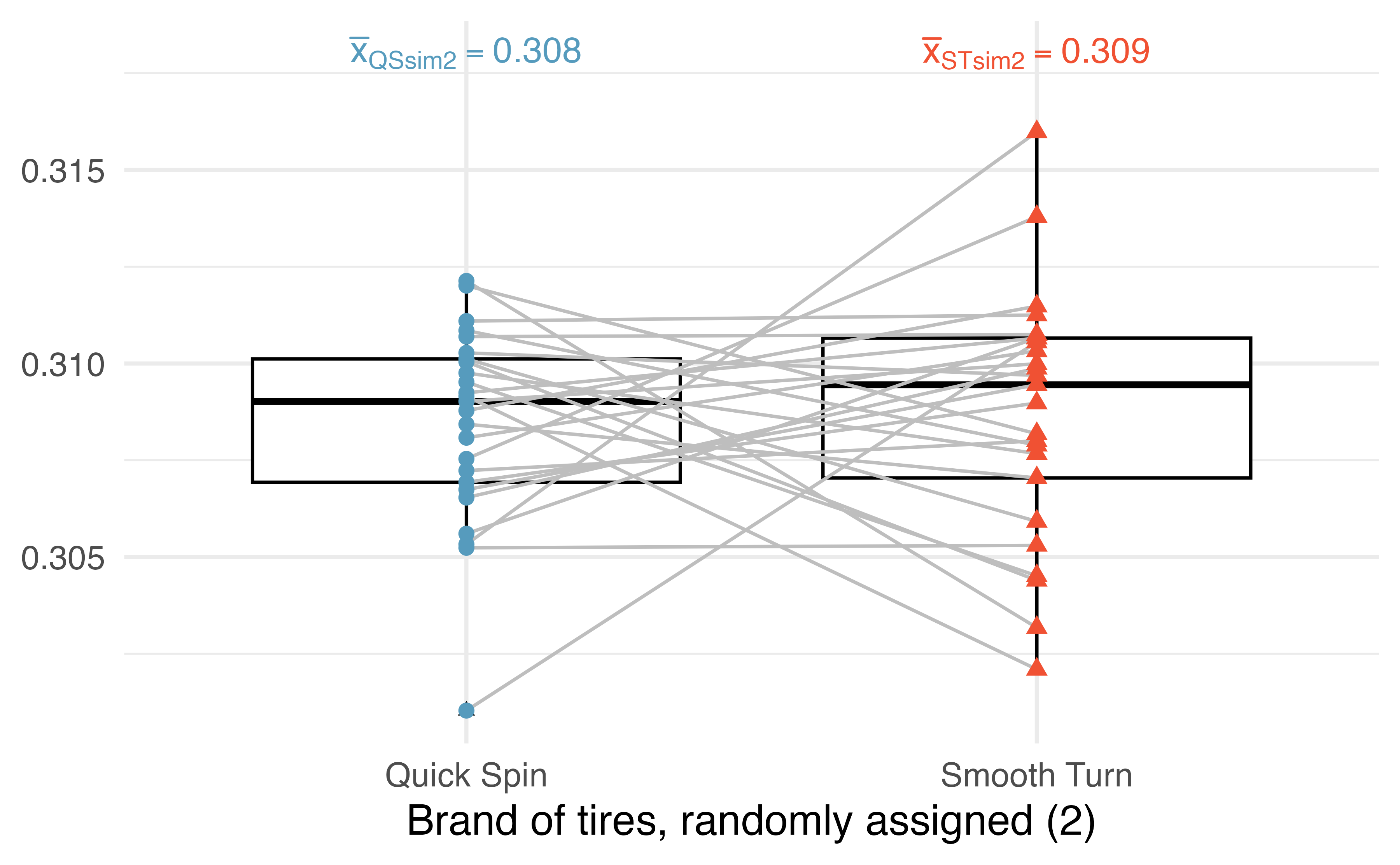 Figure 21.6: A second randomization where the brand is randomly swapped (or not) across the two tread wear measurements (in cm) from the same car.

Figure 21.7 presents yet another randomization of the data. Again, the same observations are linked by a grey line, and some of the tread values have been randomly assigned to the opposite tire brand than they were originally (while some are still connected to their original tire brands). 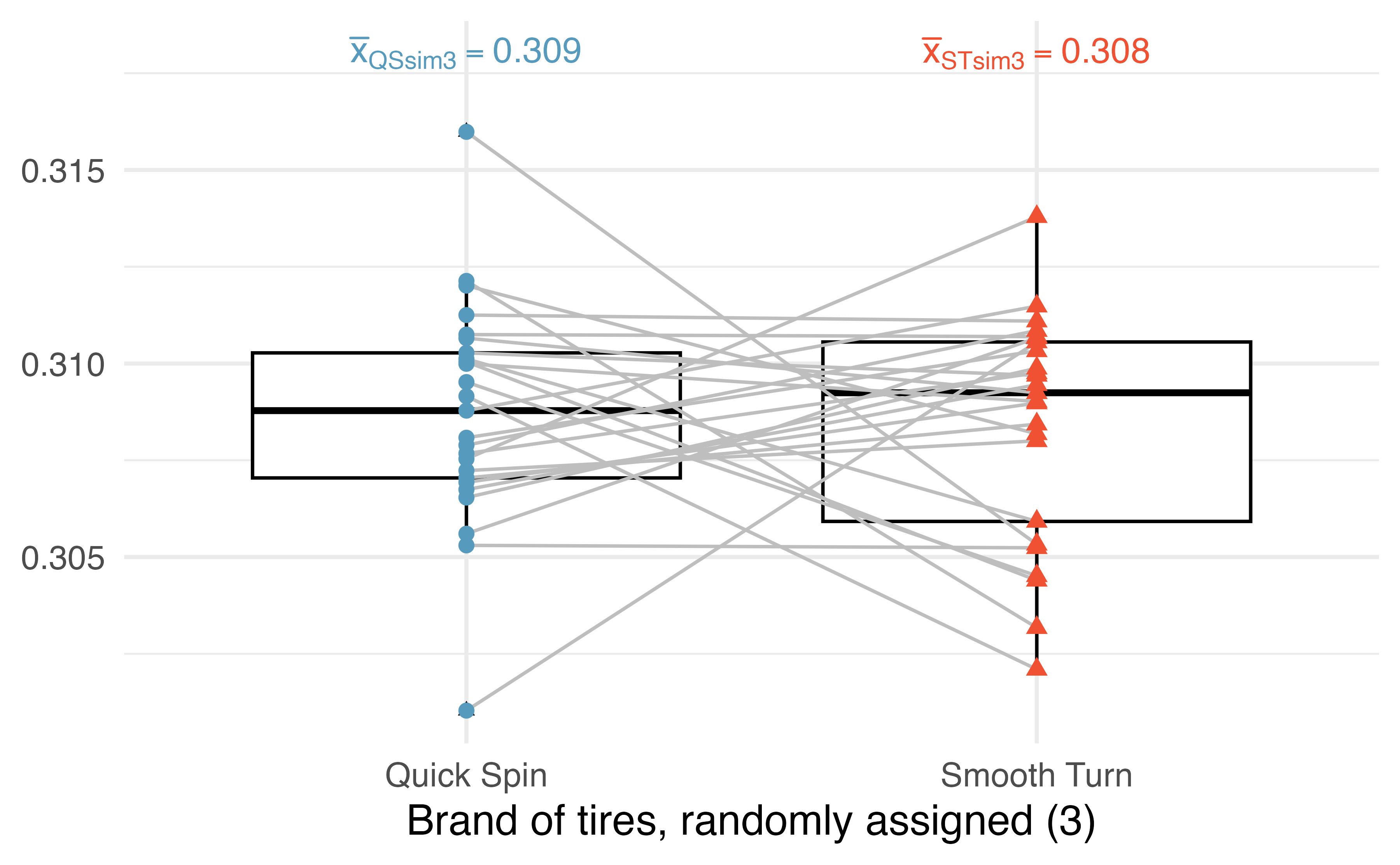 Figure 21.7: An additional randomization where the brand is randomly swapped (or not) across the two tread wear measurements (in cm) from the same car.

By repeating the randomization process, we can create a distribution of the average of the differences in tire treads, as seen in Figure 21.8. As expected (because the differences were generated under the null hypothesis), the center of the histogram is zero. A line has been drawn at the observed difference which is well outside the majority of the null differences simulated from natural variability by mixing up which the tire received Smooth Turn and which received Quick Spin. Because the observed statistic is so far away from the natural variability of the randomized differences, we are convinced that there is a difference between Smooth Turn and Quick Spin. Our conclusion is that the extra amount of average tire tread in Smooth Turn is due to more than just natural variability: we reject \(H_0\) and conclude that \(\mu_{ST} \ne \mu_{QS}.\) 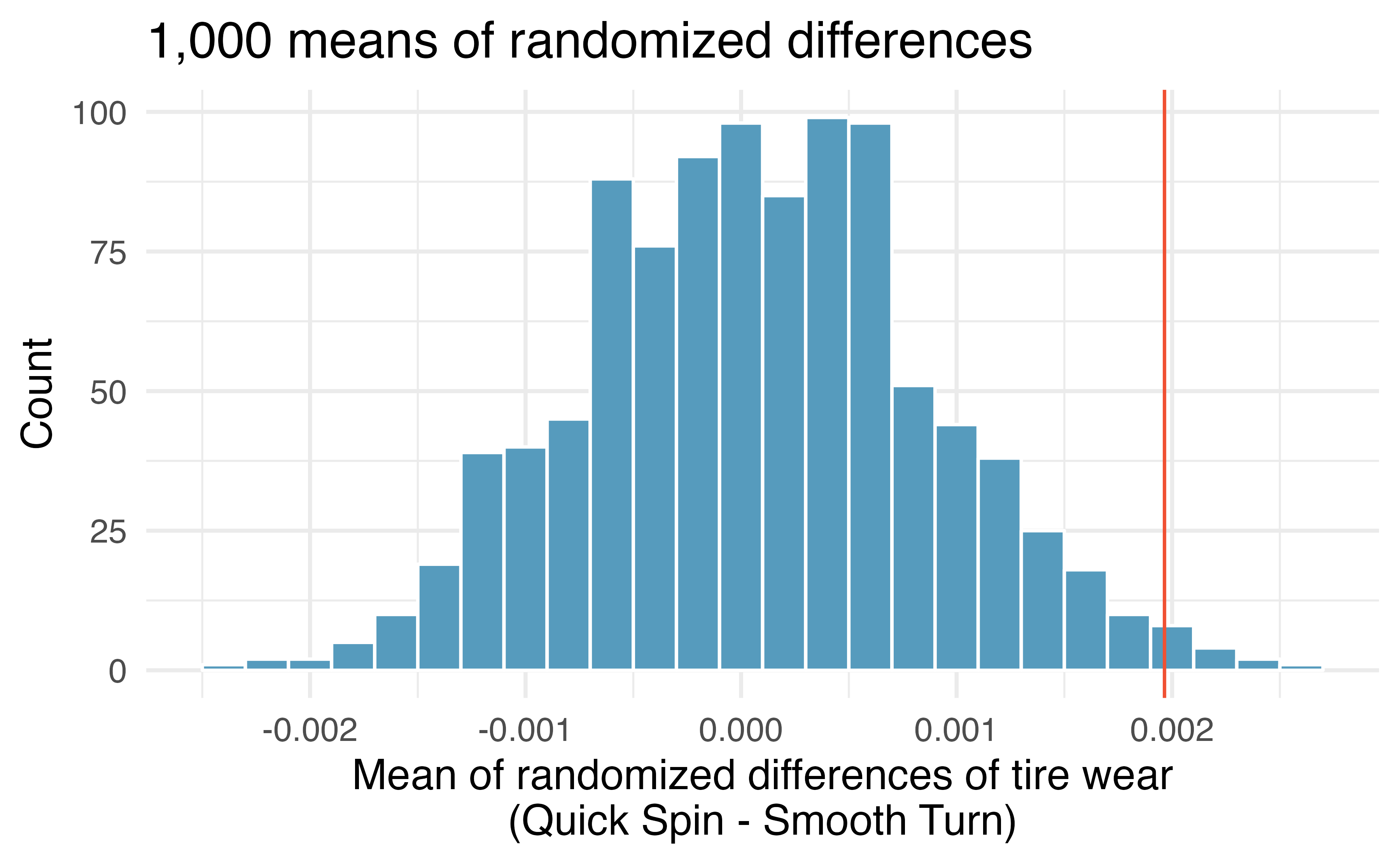 Figure 21.8: Histogram of 1,000 mean differences with tire brand randomly assigned across the two tread measurements (in cm) per pair.

For both the bootstrap and the mathematical models applied to paired data, the analysis is virtually identical to the one-sample approach given in Chapter 19. The key to working with paired data (for bootstrapping and mathematical approaches) is to consider the measurement of interest to be the difference in measured values across the pair of observations.

In an earlier edition of this textbook, we found that Amazon prices were, on average, lower than those of the UCLA Bookstore for UCLA courses in 2010. It’s been several years, and many stores have adapted to the online market, so we wondered, how is the UCLA Bookstore doing today?

We sampled 201 UCLA courses. Of those, 68 required books could be found on Amazon. A portion of the dataset from these courses is shown in Figure 21.2, where prices are in US dollars.

The ucla_textbooks_f18 data can be found in the openintro R package.

Each textbook has two corresponding prices in the dataset: one for the UCLA Bookstore and one for Amazon. When two sets of observations have this special correspondence, they are said to be paired.

21.2.2 Variability of the statistic

Using the histogram of bootstrapped difference in means, estimate the standard error of the mean of the sample differences, \(\bar{x}_{diff}.\)206

The confidence intervals seem to indicate that the UCLA bookstore price is, on average, higher than the Amazon price, as the majority of the confidence interval is positive. However, if the analysis required a strong degree of certainty (e.g., 99% confidence), and the bootstrap SE interval was most appropriate (given a second course in statistics the nuances of the methods can be investigated), the results of which book seller is higher is not well determined (because the bootstrap SE interval overlaps zero). That is, the 99% bootstrap SE interval gives potential for UCLA to be lower, on average, than Amazon (because of the possible negative values for the true mean difference in price). 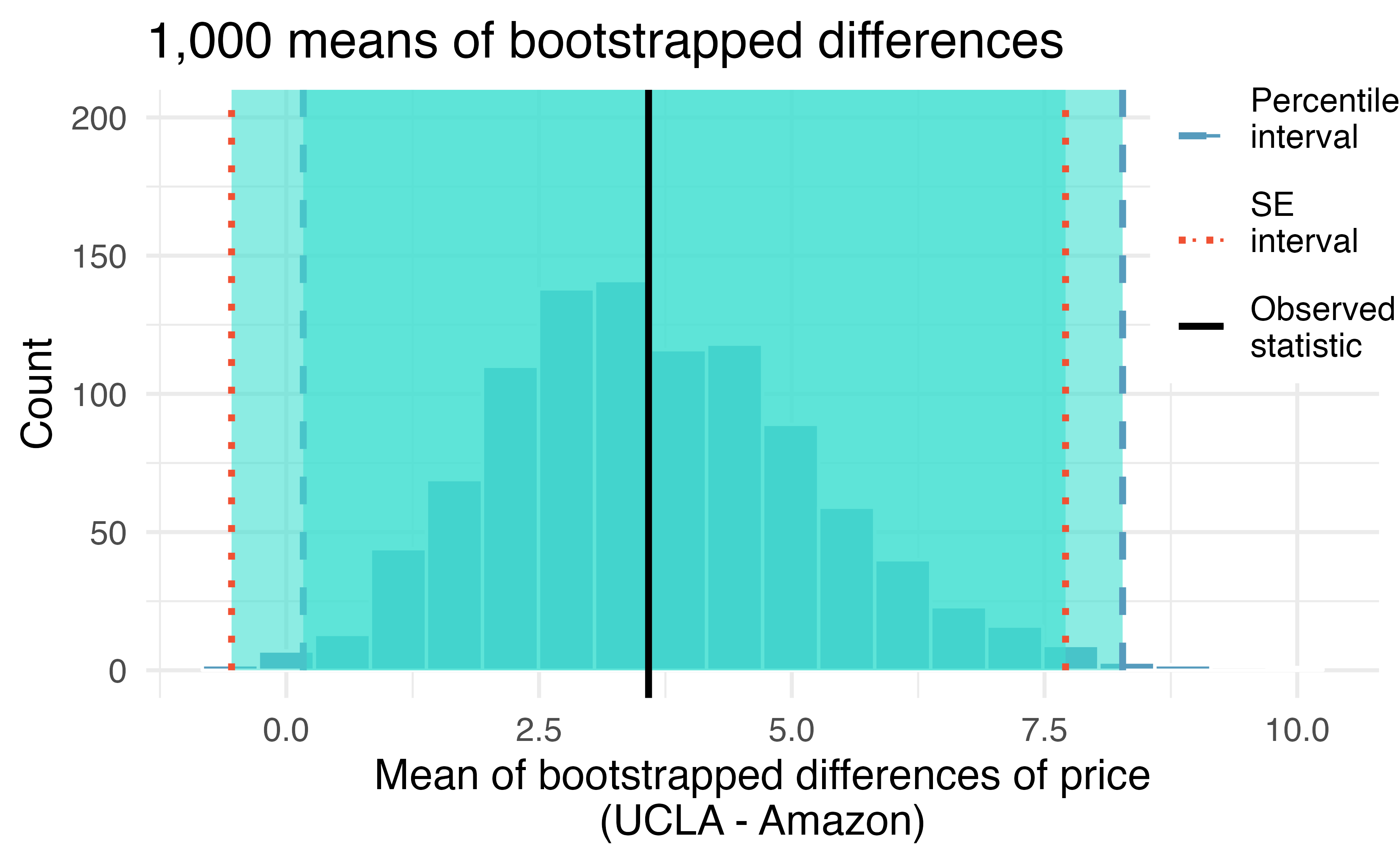 Thinking about the differences as a single observation on an observational unit changes the paired setting into the one-sample setting. The mathematical model for the one-sample case is covered in Section 19.2. 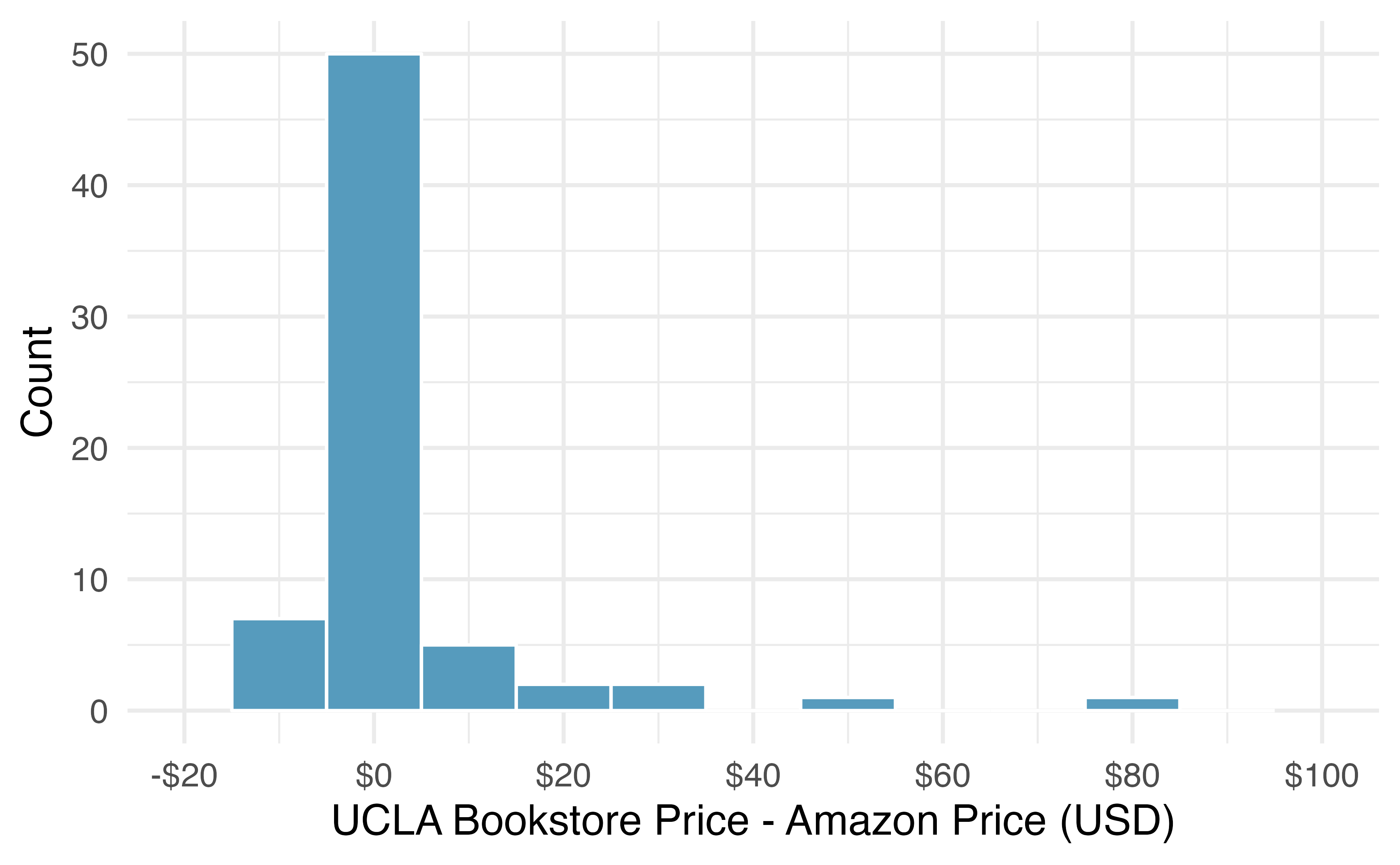 Figure 21.10: Histogram of the difference in price for each book sampled.

21.3.2 Variability of the statistic

To analyze a paired dataset, we simply analyze the differences. Table 21.3 provides the data summaries from the textbook data. Note that instead of reporting the prices separately for UCLA and Amazon, the summary statistics are given by the mean of the differences, the standard deviation of the differences, and the total number of pairs (i.e., differences). The parameter of interest is also a single value, \(\mu_{diff},\) so we can use the same \(t\)-distribution techniques we applied in Section 19.2 directly onto the observed differences.

Set up a hypothesis test to determine whether, on average, there is a difference between Amazon’s price for a book and the UCLA bookstore’s price. Also, check the conditions for whether we can move forward with the test using the \(t\)-distribution.

We are considering two scenarios: there is no difference or there is some difference in average prices.

Next, we check the independence and normality conditions. The observations are based on a simple random sample, so assuming the textbooks are independent seems reasonable. While there are some outliers, \(n = 68\) and none of the outliers are particularly extreme, so the normality of \(\bar{x}\) is satisfied. With these conditions satisfied, we can move forward with the \(t\)-distribution.

As mentioned previously, the methods applied to a difference will be identical to the one-sample techniques. Therefore, the full hypothesis test framework is presented as guided practices.

The test statistic for assessing a paired mean is a T.

The T score is a ratio of how the sample mean difference varies from zero as compared to how the observations vary.

When the null hypothesis is true and the conditions are met, T has a t-distribution with \(df = n_{diff} - 1.\)

Complete the hypothesis test started in the previous Example.

The test statistic is the T score of \(\bar{x}_{diff}\) under the null condition that the actual mean difference is 0: 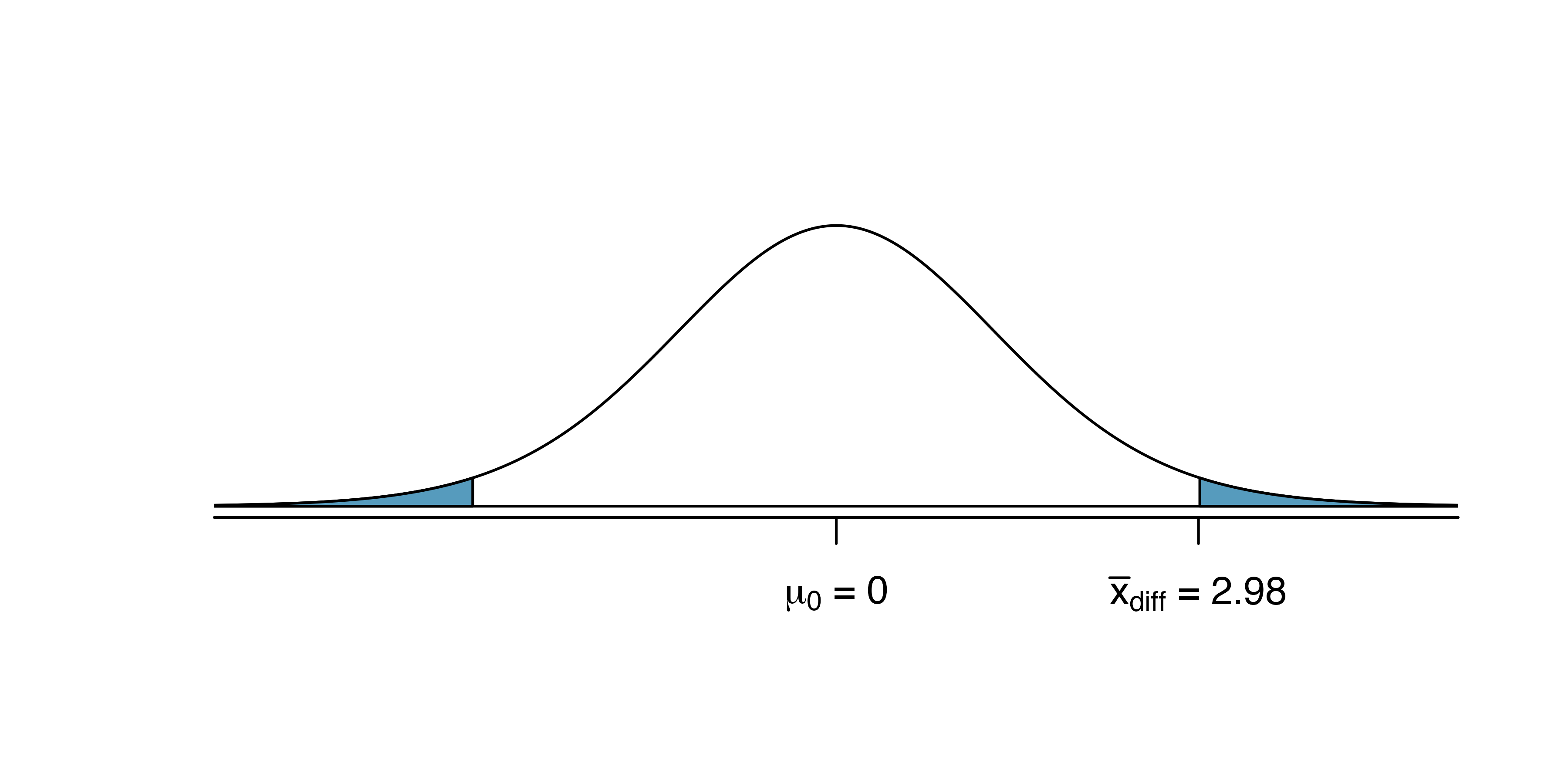 Doubling this area gives the p-value: 0.0312. Because the p-value is less than 0.05, we reject the null hypothesis. Amazon prices are, on average, lower than the UCLA Bookstore prices for UCLA courses.

The margin of error is \(t^\star_{df} \times s_{diff}/\sqrt{n_{diff}}\) where \(t^\star_{df}\) is calculated from a specified percentile on the t-distribution with df degrees of freedom.

Create a 95% confidence interval for the average price difference between books at the UCLA bookstore and books on Amazon.

We are 95% confident that the UCLA Bookstore is, on average, between $0.32 and $6.84 more expensive than Amazon for UCLA course books.

We have convincing evidence that Amazon is, on average, less expensive. How should this conclusion affect UCLA student buying habits? Should UCLA students always buy their books on Amazon?207

We introduced the following terms in the chapter. If you’re not sure what some of these terms mean, we recommend you go back in the text and review their definitions. We are purposefully presenting them in alphabetical order, instead of in order of appearance, so they will be a little more challenging to locate. However you should be able to easily spot them as bolded text.

Answers to odd numbered exercises can be found in Appendix A.21.