Hypothesis tests. When using a randomization test, we proceed as follows:

Bootstrapping, in contrast to randomization tests, represents a proxy sampling of the original population. With bootstrapping, the analyst is not forcing the null hypothesis to be true (or false, for that matter), but instead, they are replicating the variability seen in taking repeated samples from a population. Because there is no underlying true (or false) null hypothesis, bootstrapping is typically used for creating confidence intervals for the parameter of interest. Bootstrapping can be used to test particular values of a parameter (e.g., by evaluating whether a particular value of interest is contained in the confidence interval), but generally, bootstrapping is used for interval estimation instead of testing.

The mathematical models which have been used to produce inferential analyses follow a consistent framework for different parameters of interest. As a way to contrast and compare the mathematical approach, we offer the following summaries in Tables 23.1 and 23.2.

Generally, when the response variable is categorical (or binary), the summary statistic is a proportion and the model used to describe the proportion is the standard normal curve (also referred to as a \(z\)-curve or a \(z\)-distribution). We provide Table 23.1 partly as a mechanism for understanding \(z\)-procedures and partly to highlight the extremely common usage of the \(z\)-distribution in practice.

With quantitative response variables, the \(t\)-distribution was applied as the appropriate mathematical model in three distinct settings. Although the three data structures are different, their similarities and differences are worth pointing out. We provide Table 23.2 partly as a mechanism for understanding \(t\)-procedures and partly to highlight the extremely common usage of the \(t\)-distribution in practice.

Take a look at the images in Figure 23.1. How would you describe the circled item in the top image (A)? Would you call it “the triangle?” Or “the blue triangle?” How about in the bottom image (B)? Does your answer change? 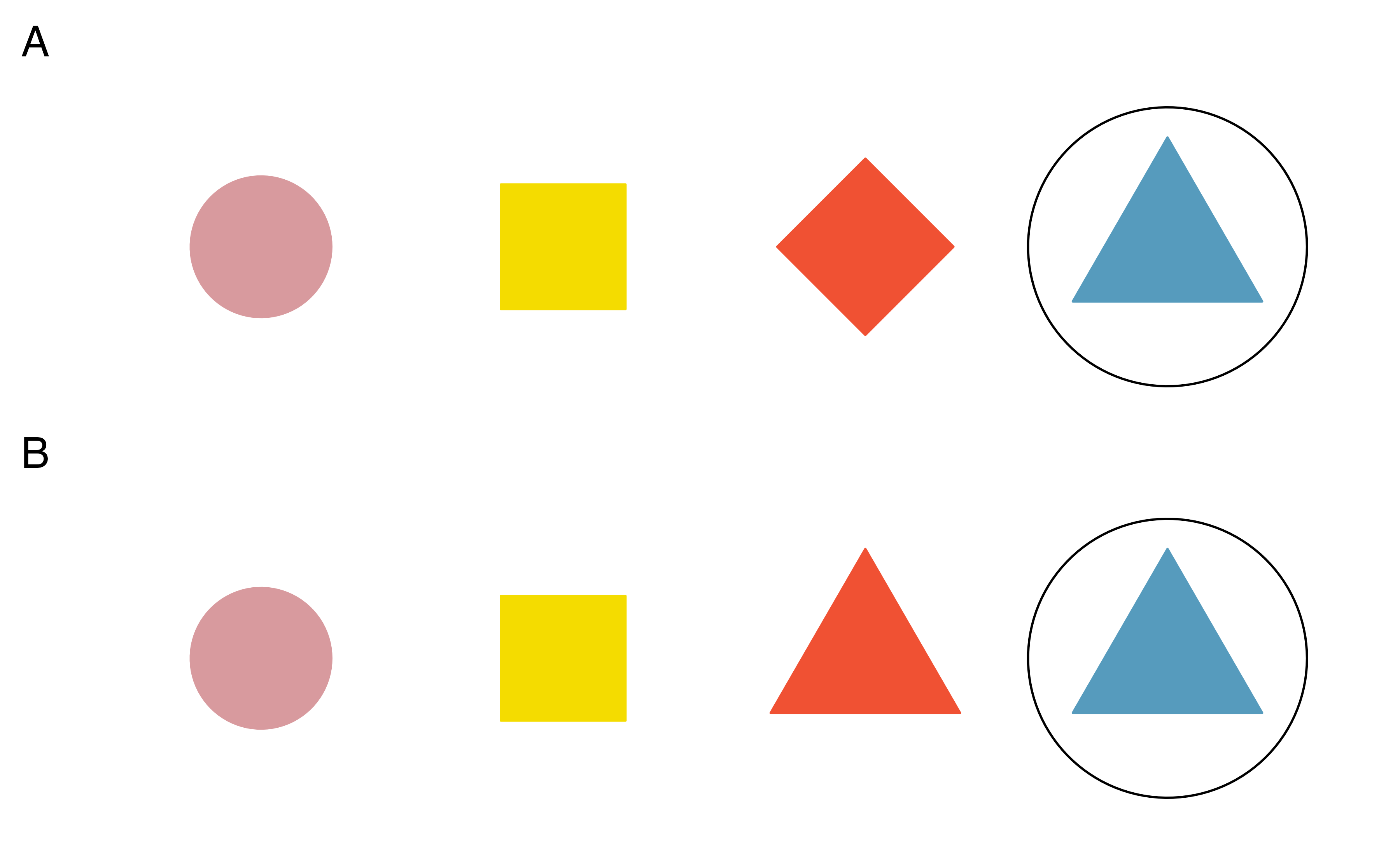 Your answers to the above questions might be different if you’re answering in a different language than English. For example, in Spanish, the adjective comes after the noun (e.g., “el triángulo azul”) therefore the incremental value of the additional adjective might be different for the top image.

Researchers studying frequent use of redundant adjectives (e.g., referring to a single triangle as “the blue triangle”) and incrementality of language processing designed an experiment where they showed the following two images to 22 native English speakers (undergraduates from University College London) and 22 native Spanish speakers (undergraduates from the Universidad de las Islas Baleares). They found that in both languages, the subjects used more redundant color adjectives in denser displays where it would be more efficient. (Rubio-Fernandez, Mollica, and Jara-Ettinger 2021)

Figure 23.2: Images used in one of the experiments described in (Rubio-Fernandez, Mollica, and Jara-Ettinger 2021).

In this case study we will examine data from redundant adjective study, which the authors have made available on Open Science Framework at osf.io/9hw68.

Table 23.3 shows the top six rows of the data. The full dataset has 88 rows. Remember that there are a total of 44 subjects in the study (22 English and 22 Spanish speakers). There are two rows in the dataset for each of the subjects: one representing data from when they were shown an image with 4 items on it and the other with 16 items on it. Each subject was asked 10 questions for each type of image (with a different layout of items on the image for each question). The variable of interest to us is redundant_perc, which gives the percentage of questions the subject used a redundant adjective to identify “the blue triangle.” 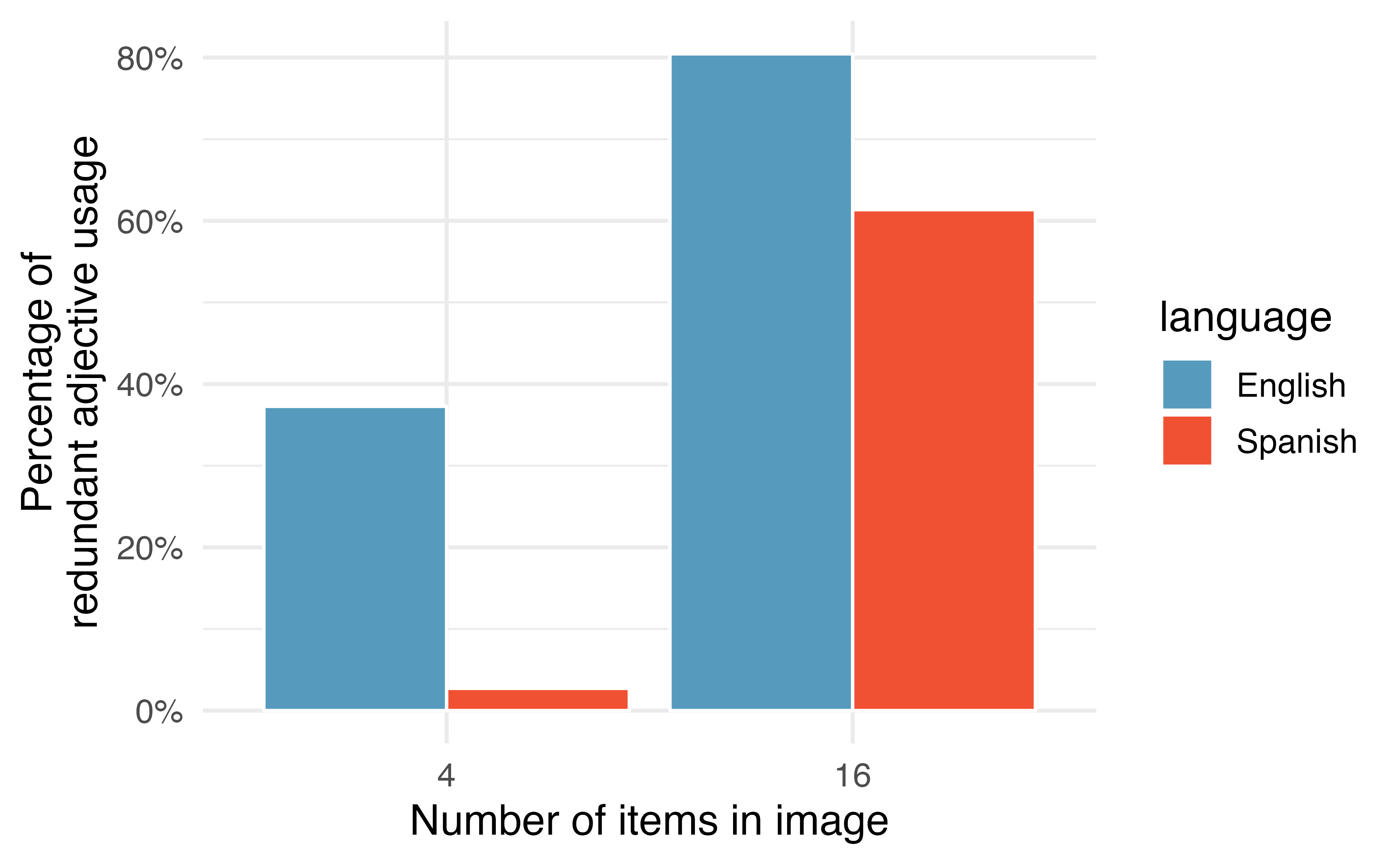 These values are also shown in Table 23.4.

23.3.2 Confidence interval for a single mean

In this experiment, the average percentage of redundant adjective usage among subjects who responded in English when presented with an image with 4 items in it is 37.27. Along with the sample average as a point estimate, however, we can construct a confidence interval for the true mean redundant adjective usage of English speakers who use redundant color adjectives when describing items in an image that is not very dense.

Using a computational method, we can construct the interval via bootstrapping. Figure 23.4 shows the distribution of 1,000 bootstrapped means from this sample. The 95% confidence interval (that is calculated by taking the 2.5th and 97.5th percentile of the bootstrap distribution is 19.1% to 56.4%. Note that this interval for the true population parameter is only valid if we can assume that the sample of English speakers are representative of the population of all English speakers. 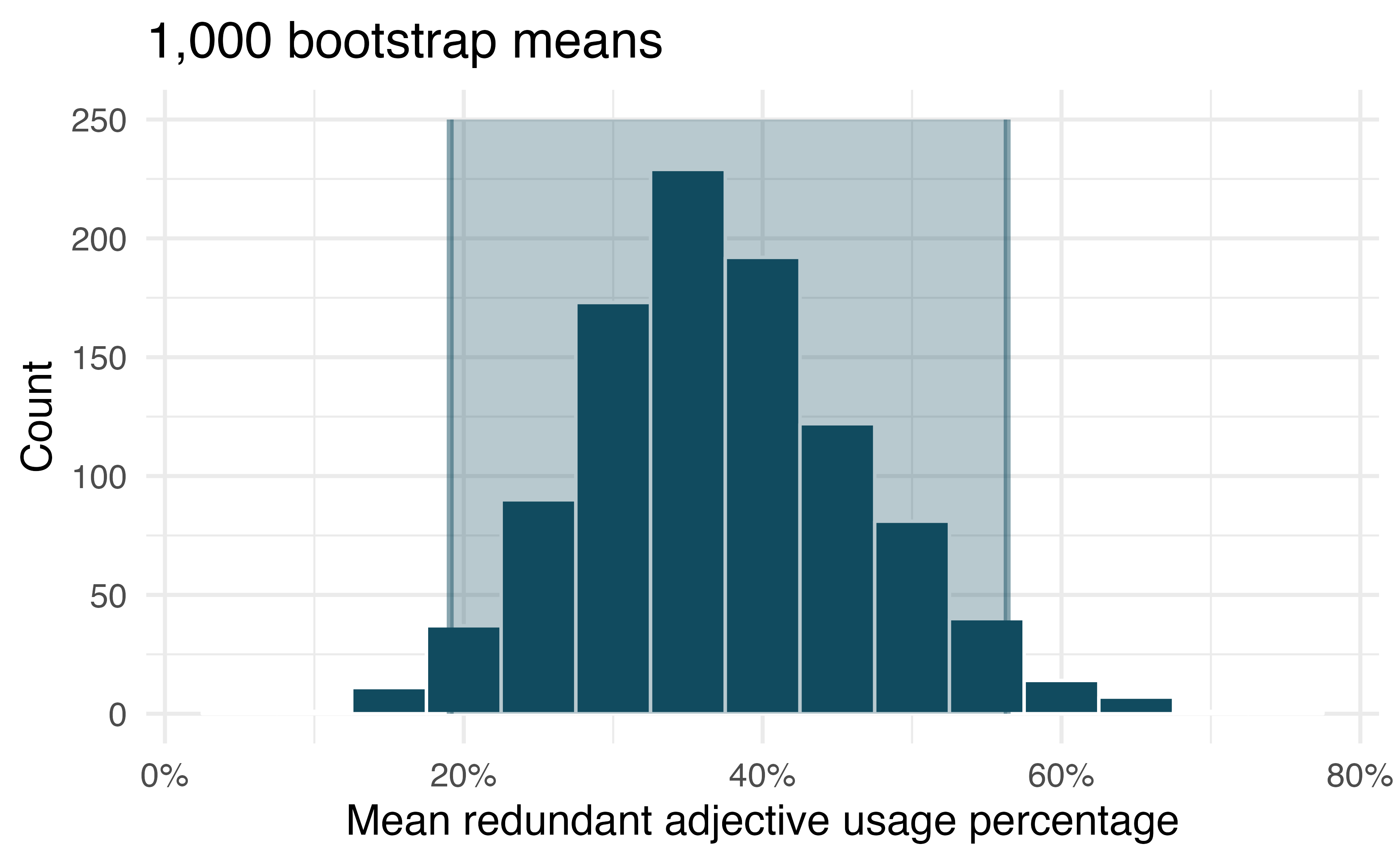 Figure 23.4: Distribution of 1,000 bootstrapped means of redundant adjective usage percentage among English speakers who were shown four items in images. Overlaid on the distribution is the 95% bootstrap percentile interval that ranges from 19.1% to 56.4%.

Let’s start with the following question: “Do the data provide convincing evidence of a difference in mean redundant adjective usage percentages between sparse (4 item) and dense (16 item) displays for English speakers?” Note that the English speaking participants were each evaluated on both the 4 item and the 16 item displays. Therefore, the variable of interest is the difference in redundant percentage. The statistic of interest will be the average of the differences, here \(\bar{x}_{diff} =\) 43.18.

Data from the first six English speaking participants are seen in Table 23.5. Although the redundancy percentages seem higher in the 16 item task, a hypothesis test will tell us whether the differences observed in the data could be due to natural variability.

We can answer the research question using a hypothesis test with the following hypotheses:

where \(\mu_{diff}\) is the true difference in redundancy percentages when comparing a 16 item display with a 4 item display. Recall that the computational method used to assess a hypothesis pertaining to the true average of a paired difference shuffles the observed percentage across the two groups (4 item vs 16 item) but within a single participant. The shuffling process allows for repeated calculations of potential sample differences under the condition that the null hypothesis is true. 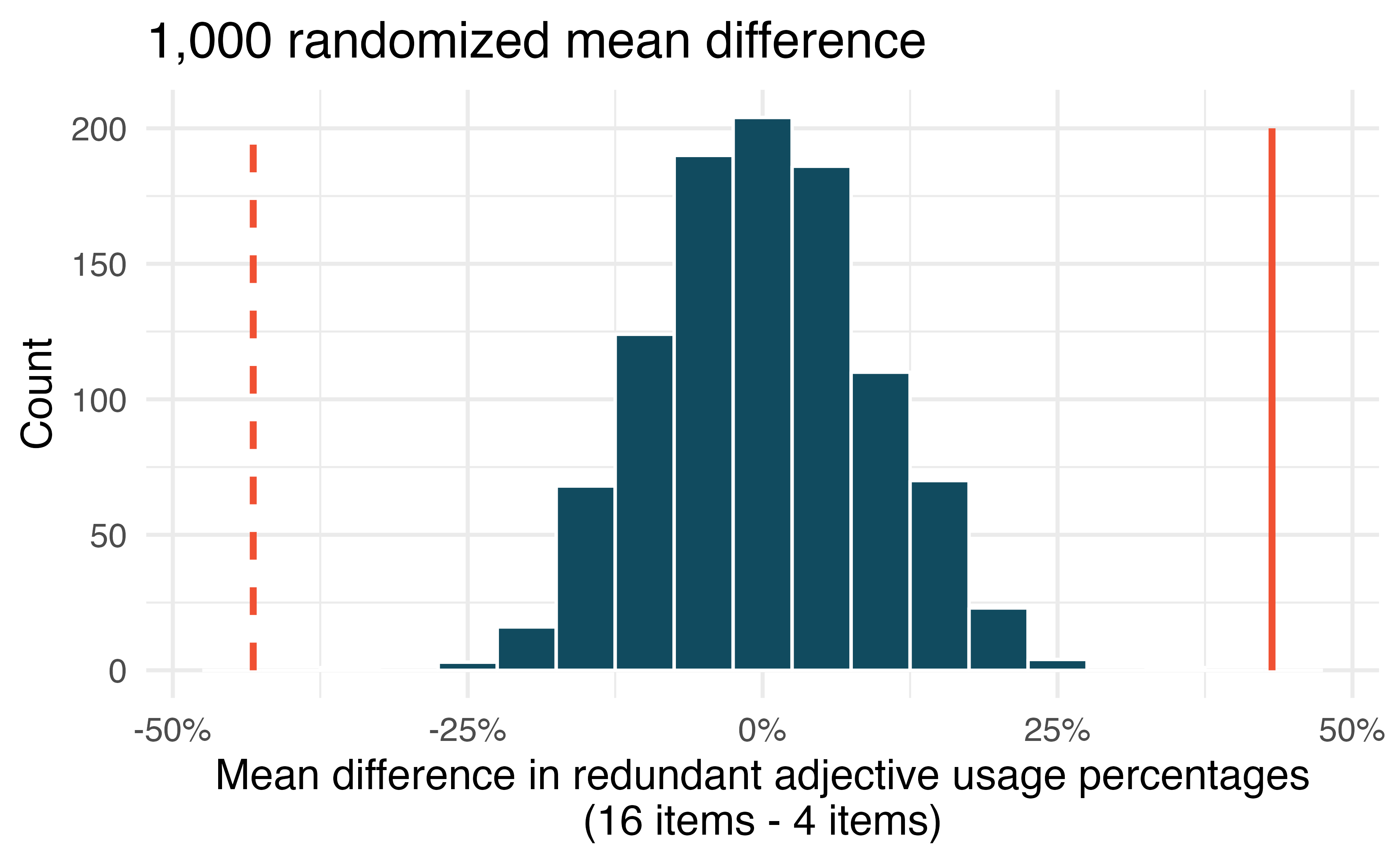 Figure 23.5: Distribution of 1,000 mean differences of redundant adjective usage percentage among English speakers who were shown images with 4 and 16 items. Overlaid on the distribution is the observed average difference in the sample (solid line) as well as the difference in the other direction (dashed line), which is far out in the tail, yielding a p-value that is approximately 0.

With such a small p-value, we reject the null hypothesis and conclude that the data provide convincing evidence of a difference in mean redundant adjective usage percentages across different displays for English speakers.

Finally, let’s consider the question “How does redundant adjective usage differ between English speakers and Spanish speakers?” The English speakers are independent from the Spanish speakers, but since the same subjects were shown the two types of displays, we can’t combine data from the two display types (4 objects and 16 objects) together while maintaining independence of observations. Therefore, to answer questions about language differences, we will need to conduct two hypothesis tests, one for sparse displays and the other for dense displays. In each of the tests, the hypotheses are as follows:

Here, the randomization process is slightly different than the paired setting (because the English and Spanish speakers do not have a natural pairing across the two groups). To answer the research question using a computational method, we can use a randomization test where we permute the data across all participants under the assumption that the null hypothesis is true (no difference in mean redundant adjective usage percentages across English vs Spanish speakers). 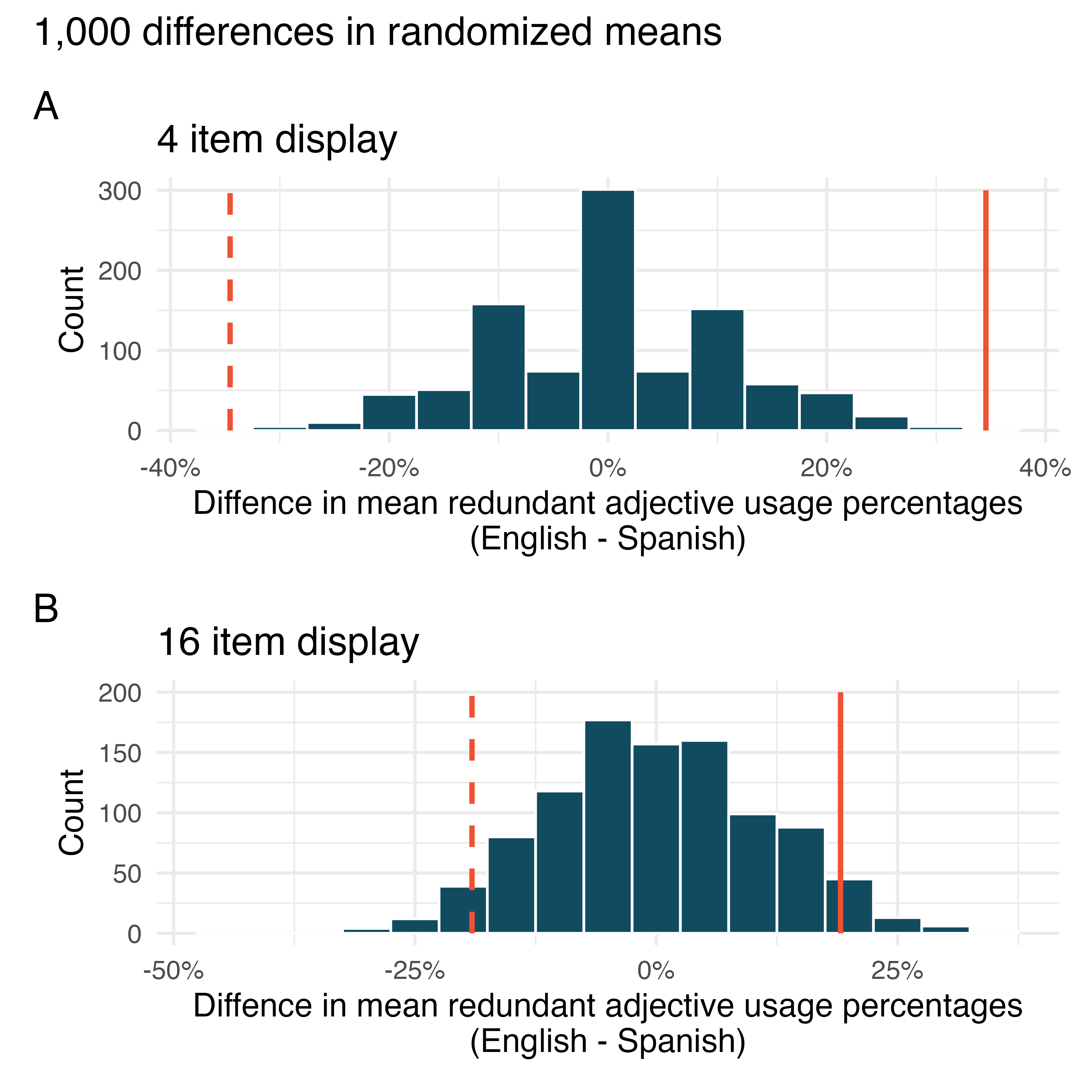 Based on the p-values (a measure of deviation from the null claim), we can conclude that the data provide convincing evidence of a difference in mean redundant adjective usage percentages between languages in 4 item displays (small p-value) but not in 16 item displays (not small p-value). The results suggests that language patterns around redundant adjective usage might be more similar for denser displays than sparser displays.