In this case study, we consider Ebay auctions of a video game called Mario Kart for the Nintendo Wii. The outcome variable of interest is the total price of an auction, which is the highest bid plus the shipping cost. We will try to determine how total price is related to each characteristic in an auction while simultaneously controlling for other variables. For instance, all other characteristics held constant, are longer auctions associated with higher or lower prices? And, on average, how much more do buyers tend to pay for additional Wii wheels (plastic steering wheels that attach to the Wii controller) in auctions? Multiple regression will help us answer these and other questions.

The mariokart data can be found in the openintro R package.

In Table 27.3 we fit a mathematical linear regression model with the game’s condition as a predictor of auction price.

Results of the model are summarized below:

Write down the equation for the model, note whether the slope is statistically different from zero, and interpret the coefficient.236

Sometimes there are underlying structures or relationships between predictor variables. For instance, new games sold on Ebay tend to come with more Wii wheels, which may have led to higher prices for those auctions. We would like to fit a model that includes all potentially important variables simultaneously, which would help us evaluate the relationship between a predictor variable and the outcome while controlling for the potential influence of other variables.

We want to construct a model that accounts for not only the game condition but simultaneously accounts for three other variables:

Table 27.4 summarizes the full model. Using the output, we identify the point estimates of each coefficient and the corresponding impact (measured with information for the standard error to compute the p-value).

Write out the model’s equation using the point estimates from Table 27.4. How many predictors are there in the model? How many coefficients are estimated?237

Compute the residual of the first observation in Table 27.1 using the equation identified in Table 27.4.239

In Table 27.3, we estimated a coefficient for cond_new in of \(b_1 = 10.90\) with a standard error of \(SE_{b_1} = 1.26\) when using simple linear regression. Why might there be a difference between that estimate and the one in the multiple regression setting?

If we examined the data carefully, we would see that there is multicollinearity among some predictors. For instance, when we estimated the connection of the outcome price and predictor cond_new using simple linear regression, we were unable to control for other variables like the number of Wii wheels included in the auction. That model was biased by the confounding variable wheels. When we use both variables, this particular underlying and unintentional bias is reduced or eliminated (though bias from other confounding variables may still remain).

Previously, using a mathematical model, we investigated the coefficients associated with cond_new when predicting price in a linear model. 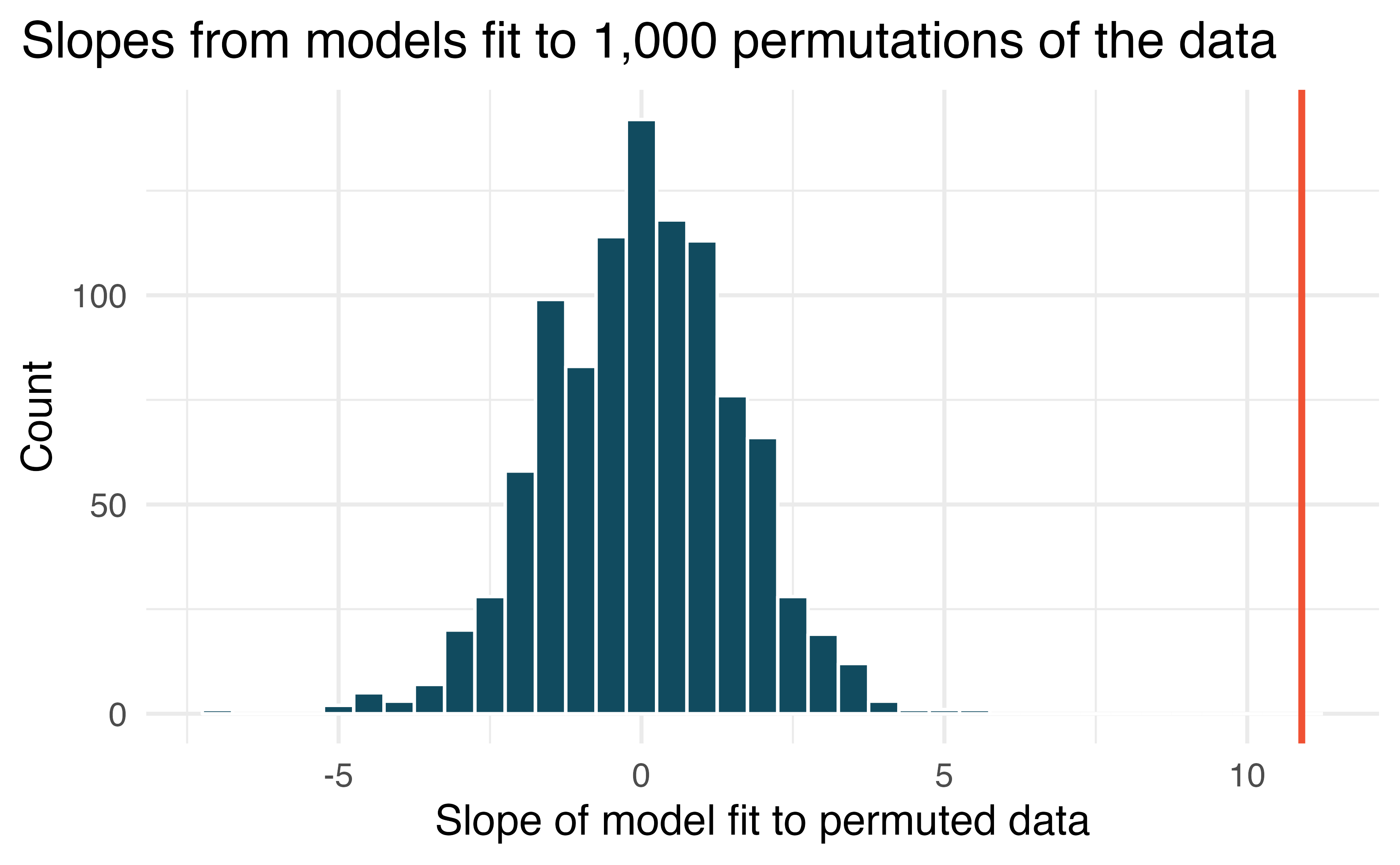 Figure 27.1: Estimated slopes from linear models (price regressed on cond_new) built on 1,000 randomized datasets. Each dataset was permuted under the null hypothesis.

The null hypothesis is that, in the population, there is no linear relationship between the price and the cond_new of the Mario Kart games. When the data are randomly permuted, prices are randomly assigned to a condition (new or used), so that the null hypothesis is forced to be true, i.e. permutation is done under the assumption that no relationship between the two variables exists. In the actual study, the new Mario Kart games do actually cost more (on average) than the used games! So the slope describing the actual observed relationship is not one that is likely to have happened in a randomly dataset permuted under the assumption that the null hypothesis is true.

Using the histogram in Figure 27.1, find the p-value and conclude the hypothesis test in the context of the problem (use words like price of the game and whether it is new).240

Although knowing there is a relationship between the condition of the game and its price, we might be more interested in the difference in price, here given by the slope of the linear regression line. That is, \(\beta_1\) represents the population value for the difference in price between new Mario Kart games and used games. 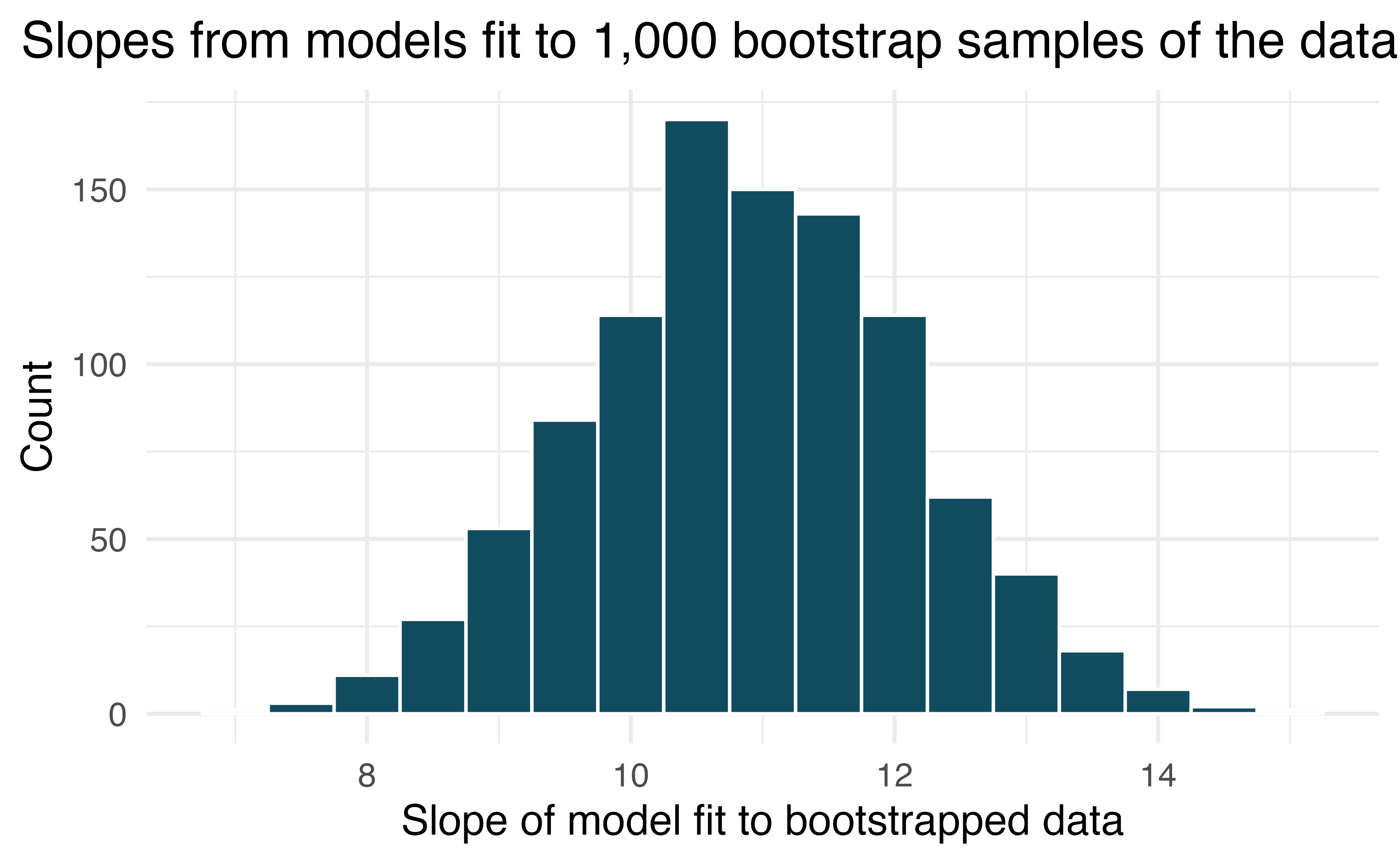 The slopes seem to vary from approximately 8 to 14. Using the empirical rule, we know that if a variable has a bell-shaped distribution, most of the observations will be with 2 standard errors of the center. Therefore, a rough approximation of the standard error is 1.5. The standard error given in Table 27.3 is 1.26 which is not too different from the value computed using the bootstrap approach.

Use Figure 27.2 to create a 90% standard error bootstrap confidence interval for the true slope. Interpret the interval in context.242

Use Figure 27.2 to create a 90% bootstrap percentile confidence interval for the true slope. Interpret the interval in context.243

In Chapter 8, models were compared using \(R^2_{adj}.\) In Chapter 25, however, a computational approach was introduced to compare models by removing chunks of data one at a time and assessing how well the variables predicted the observations that had been held out.

Figure 27.3 was created by cross-validating models with the same variables as in Table 27.3 and Table 27.4. We applied 3-fold cross-validation, so 1/3 of the data was removed while 2/3 of the observations were used to build each model (first cond_new only and then cond_new, stock_photo, duration, and wheels). Note that each time 1/3 of the data is removed, the resulting model will produce slightly different coefficients.

The points in Figure 27.3 represent the prediction (x-axis) and residual (y-axis) for each observation run through the cross-validated model. In other words, the model is built (using the other 2/3) without the observation (which is in the 1/3) being used. The residuals give us a sense for how well the model will do at predicting observations which were not a part of the original dataset (e.g., future studies). 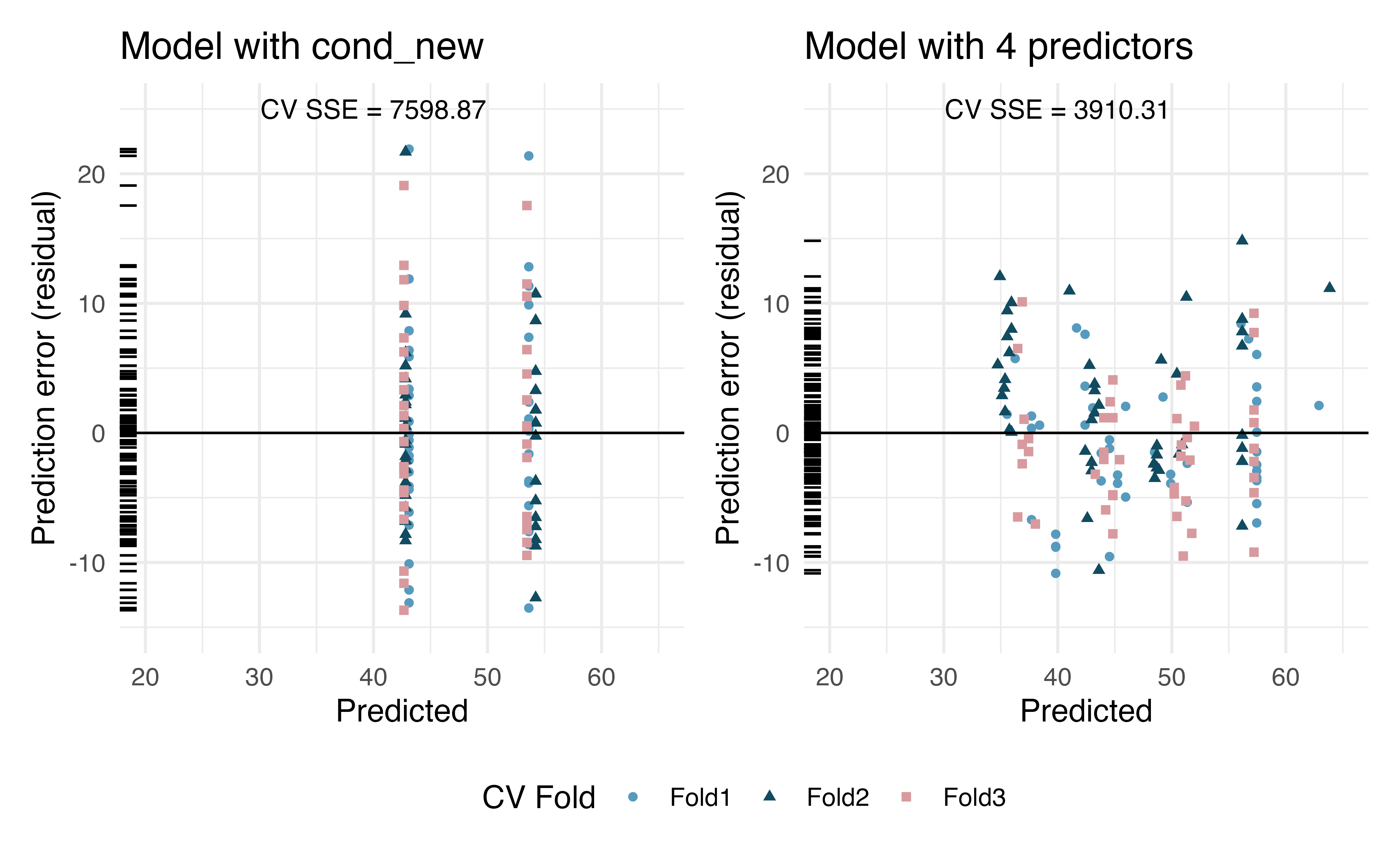 In the second graph in Figure 27.3, note the point at roughly (predicted = 50 and error = 10). Estimate the observed and predicted value for that observation.244

In the second graph in Figure 27.3, for the same point at roughly (predicted = 50 and error = 10), describe which cross-validation fold(s) were used to build its prediction model.245

By noting the spread of the cross-validated prediction errors (on the y-axis) in Figure 27.3, which model should be chosen for a final report on these data?246

Using the summary statistic cross-validation sum of squared errors (CV SSE), which model should be chosen for a final report on these data?247