In this chapter, we expand on the familiar idea of using a sample proportion to estimate a population proportion. That is, we create what is called a confidence interval, which is a range of plausible values where we may find the true population value. The process for creating a confidence interval is based on understanding how a statistic (here the sample proportion) varies around the parameter (here the population proportion) when many different statistics are calculated from many different samples.

The ideal world where sampling data is free or extremely cheap is almost never the case, and taking repeated samples from a population is usually impossible.

As seen in Chapter 11, randomization is a statistical technique suitable for evaluating whether a difference in sample proportions is due to chance.

Randomization tests are best suited for modeling experiments where the treatment (explanatory variable) has been randomly assigned to the observational units and there is an attempt to answer a simple yes/no research question.

For example, consider the following research questions that can be well assessed with a randomization test:

Here, we explore the situation where the focus is on a single proportion, and we introduce a new simulation method: bootstrapping.

Bootstrapping is best suited for modeling studies where the data have been generated through random sampling from a population.

As with randomization tests, our goal with bootstrapping is to understand variability of a statistic.

Unlike randomization tests (which modeled how the statistic would change if the treatment had been allocated differently), the bootstrap will model how a statistic varies from one sample to another taken from the population. This will provide information about how different the statistic is from the parameter of interest.

Quantifying the variability of a statistic from sample to sample is a hard problem.

Fortunately, sometimes the mathematical theory for how a statistic varies (across different samples) is well-known; this is the case for the sample proportion as seen in Chapter 13.

However, some statistics do not have simple theory for how they vary, and bootstrapping provides a computational approach for providing interval estimates for almost any population parameter. In this chapter we will focus on bootstrapping to estimate a single proportion, and we will revisit bootstrapping in Chapters 19 through 21, so you’ll get plenty of practice as well as exposure to bootstrapping in many different datasettings.

Our goal with bootstrapping will be to produce an interval estimate (a range of plausible values) for the population parameter.

People providing an organ for donation sometimes seek the help of a special medical consultant. These consultants assist the patient in all aspects of the surgery, with the goal of reducing the possibility of complications during the medical procedure and recovery. Patients might choose a consultant based in part on the historical complication rate of the consultant’s clients.

Is it possible to assess the consultant’s claim (that the reduction in complications is due to her work) using the data?

The claim is that there is a causal connection, but the data are observational, so we must be on the lookout for confounding variables.

For example, maybe patients who can afford a medical consultant can afford better medical care, which can also lead to a lower complication rate.

While it is not possible to assess the causal claim, it is still possible to understand the consultant’s true rate of complications.

A parameter is the “true” value of interest.

For example, we estimate the probability \(p\) of a complication for a client of the medical consultant by examining the past complications rates of her clients:

12.1.2 Variability of the statistic

In the medical consultant case study, the parameter is \(p,\) the true probability of a complication for a client of the medical consultant. There is no reason to believe that \(p\) is exactly \(\hat{p} = 3/62,\) but there is also no reason to believe that \(p\) is particularly far from \(\hat{p} = 3/62.\) By sampling with replacement from the dataset (a process called bootstrapping), the variability of the possible \(\hat{p}\) values can be approximated.

Most of the inferential procedures covered in this text are grounded in quantifying how one dataset would differ from another when they are both taken from the same population. It does not make sense to take repeated samples from the same population because if you have the means to take more samples, a larger sample size will benefit you more than separately evaluating two sample of the exact same size. Instead, we measure how the samples behave under an estimate of the population. 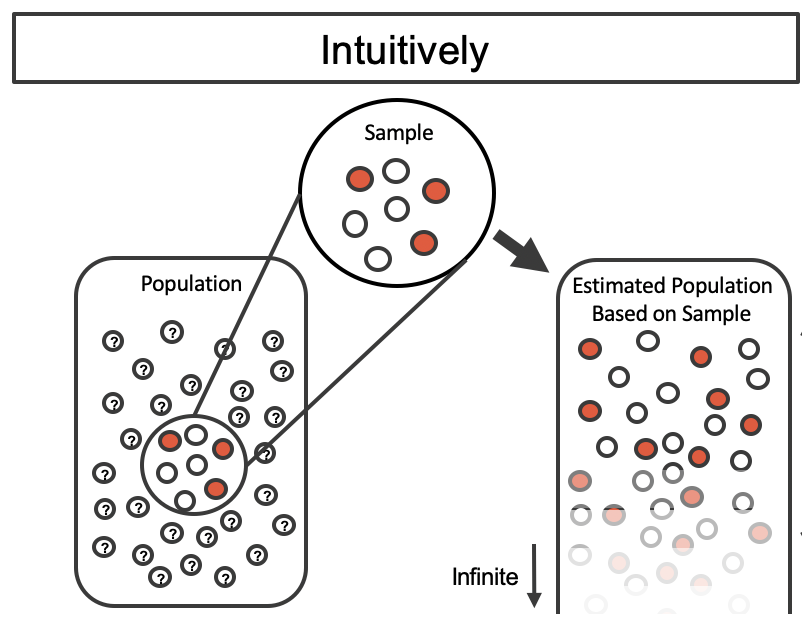 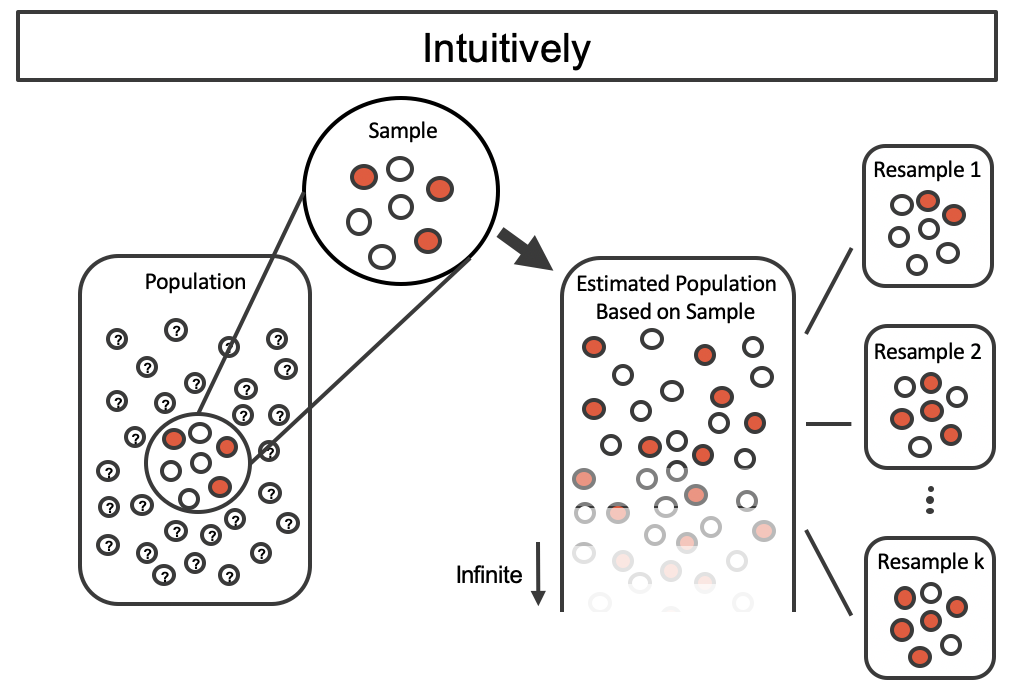 Figure 12.2: Bootstrap sampling provides a measure of the sample to sample variability. Note that we are taking samples from the estimated population that was created from the observed data.

By summarizing each of the bootstrap samples (here, using the sample proportion), we see, directly, the variability of the sample proportion, \(\hat{p},\) from sample to sample. The distribution of \(\hat{p}_{boot}\) for the example scenario is shown in Figure 12.3, and the full bootstrap distribution for the medical consultant data is shown in Figure 12.6.

Figure 12.3: The bootstrapped proportion is estimated for each bootstrap sample. The resulting bootstrap distribution (dotplot) provides a measure for how the proportions vary from sample to sample

It turns out that in practice, it is very difficult for computers to work with an infinite population (with the same proportional breakdown as in the sample). However, there is a physical and computational method which produces an equivalent bootstrap distribution of the sample proportion in a computationally efficient manner.

Consider the observed data to be a bag of marbles 3 of which are success (red) and 4 of which are failures (white). By drawing the marbles out of the bag with replacement, we depict the exact same sampling process as was done with the infinitely large estimated population. 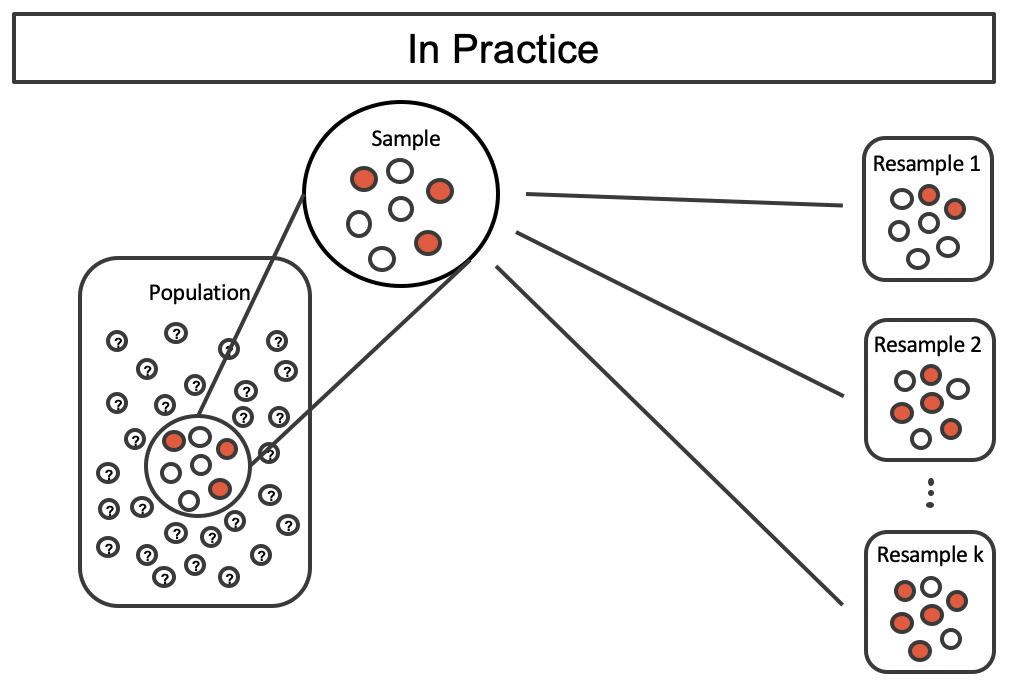 Figure 12.4: Taking repeated resamples from the sample data is the same process as creating an infinitely large estimate of the population. It is computationally more feasible to take resamples directly from the sample. Note that the resampling is now done with replacement (that is, the original sample does not ever change) so that the original sample and estimated hypothetical population are equivalent. 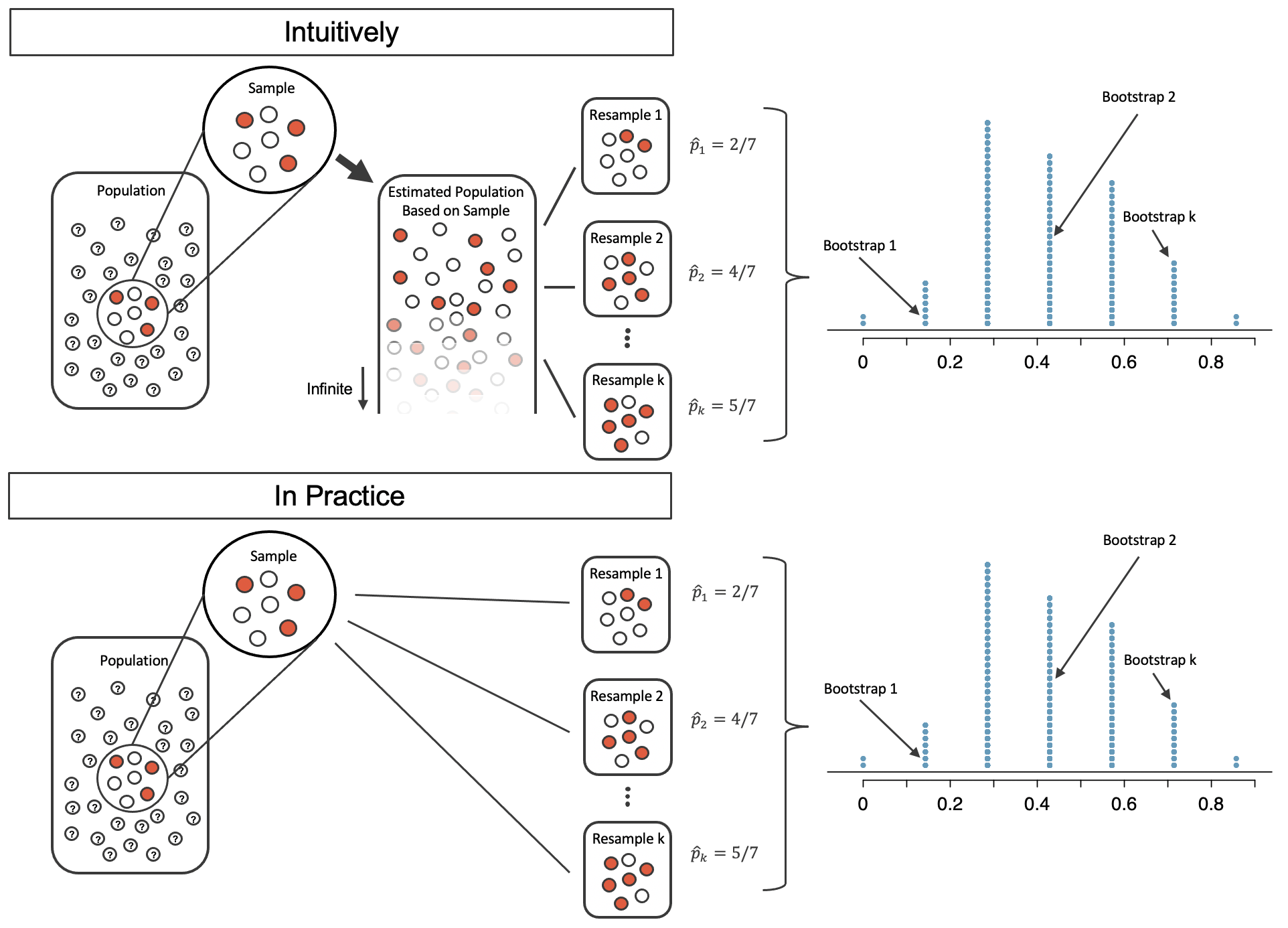 Figure 12.5: A comparison of the process of sampling from the estimate infinite population and resampling with replacement from the original sample. Note that the dotplot of bootstrapped proportions is the same because the process by which the statistics were estimated is equivalent.

If we apply the bootstrap sampling process to the medical consultant example, we consider each client to be one of the marbles in the bag. There will be 59 white marbles (no complication) and 3 red marbles (complication). If we choose 62 marbles out of the bag (one at a time with replacement) and compute the proportion of simulated patients with complications, \(\hat{p}_{boot},\) then this “bootstrap” proportion represents a single simulated proportion from the “resample from the sample” approach.

In a simulation of 62 patients, about how many would we expect to have had a complication?131

The range of values for the true proportion is called a bootstrap percentile confidence interval, and we will see it again throughout the next few sections and chapters. 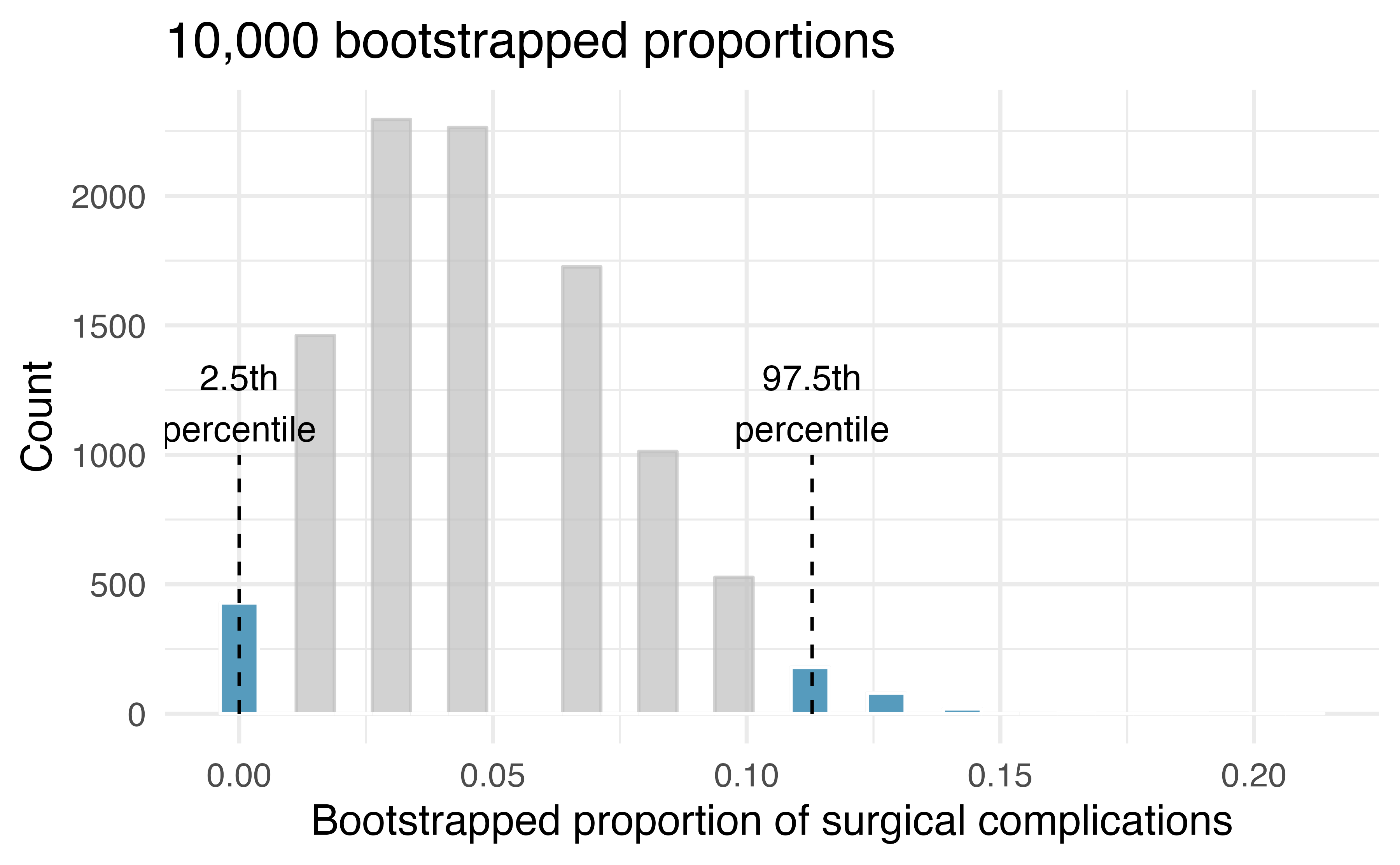 Figure 12.6: The original medical consultant data is bootstrapped 10,000 times. Each simulation creates a sample from the original data where the probability of a complication is \(\hat{p} = 3/62.\) The bootstrap 2.5 percentile proportion is 0 and the 97.5 percentile is 0.113. The result is: we are confident that, in the population, the true probability of a complication is between 0% and 11.3%.

Here’s a game you can try with your friends or family: pick a simple, well-known song, tap that tune on your desk, and see if the other person can guess the song. In this simple game, you are the tapper, and the other person is the listener.

A Stanford University graduate student named Elizabeth Newton conducted an experiment using the tapper-listener game.132 In her study, she recruited 120 tappers and 120 listeners into the study. About 50% of the tappers expected that the listener would be able to guess the song. Newton wondered, is 50% a reasonable expectation?

In Newton’s study, only 3 out of 120 listeners (\(\hat{p} = 0.025\)) were able to guess the tune! That seems like quite a low number which leads the researcher to ask: what is the true proportion of people who can guess the tune?

12.2.2 Variability of the statistic

To answer the question, we will again use a simulation. To simulate 120 games, this time we use a bag of 120 marbles 3 are red (for those who guessed correctly) and 117 are white (for those who could not guess the song). Sampling from the bag 120 times (remembering to replace the marble back into the bag each time to keep constant the population proportion of red) produces one bootstrap sample.

For example, we can start by simulating 5 tapper-listener pairs by sampling 5 marbles from the bag of 3 red and 117 white marbles.

After selecting 120 marbles, we counted 2 red for \(\hat{p}_{boot1} = 0.0167.\) As we did with the randomization technique, seeing what would happen with one simulation isn’t enough. In order to understand how far the observed proportion of 0.025 might be from the true parameter, we should generate more simulations. Here we have repeated the entire simulation ten times: 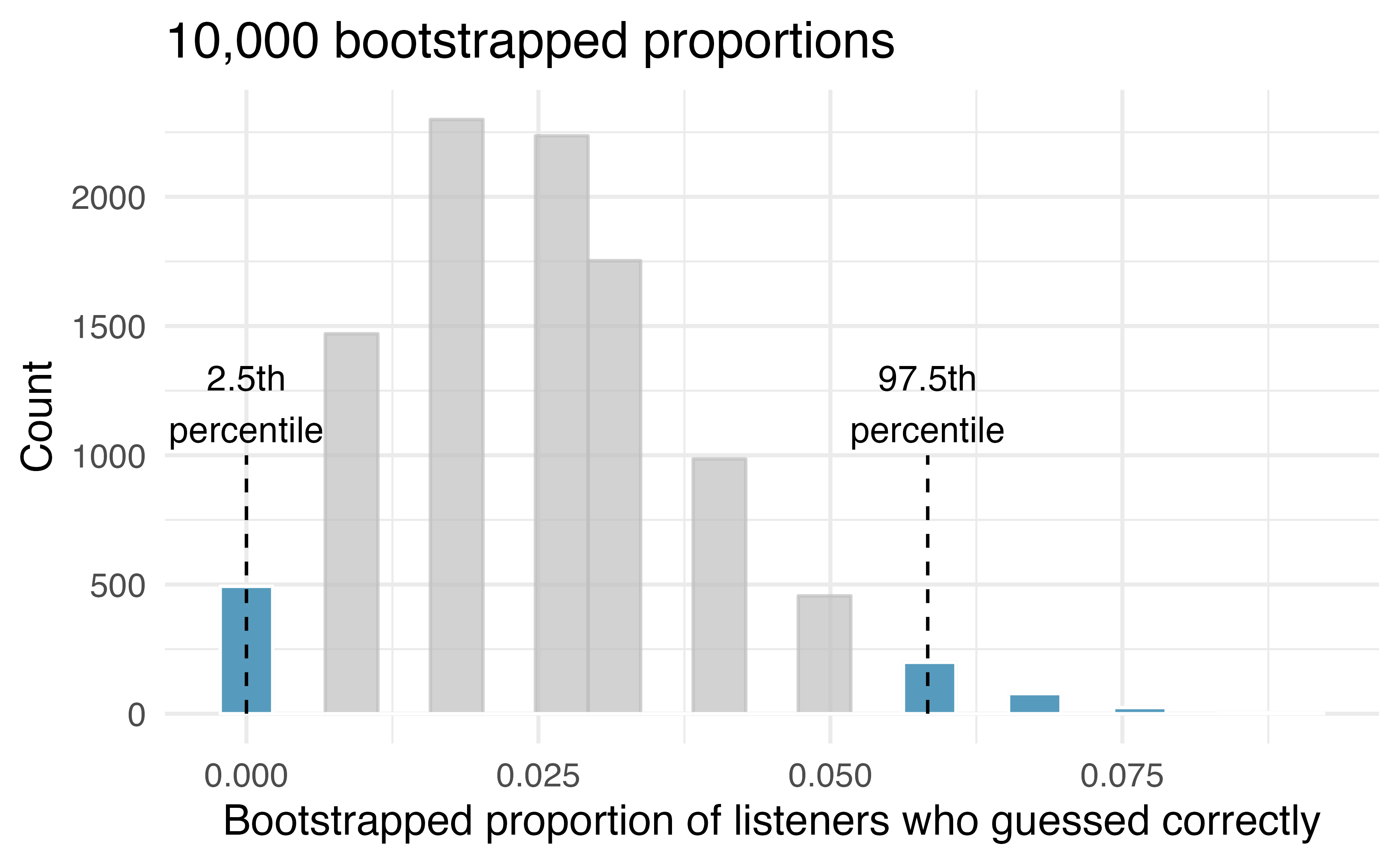 Figure 12.7: The original listener-tapper data is bootstrapped 10,000 times. Each simulation creates a sample where the probability of being correct is \(\hat{p} = 3/120.\) The 2.5 percentile proportion is 0 and the 97.5 percentile is 0.0583. The result is that we are confident that, in the population, the true percent of people who can guess correctly is between 0% and 5.83%.

Do the data provide convincing evidence against the claim that 50% of listeners can guess the tapper’s tune?133

12.3.1 Plausible range of values for the population parameter

A plausible range of values for the population parameter is called a confidence interval. Using only a single point estimate is like fishing in a murky lake with a spear, and using a confidence interval is like fishing with a net. We can throw a spear where we saw a fish, but we will probably miss. On the other hand, if we toss a net in that area, we have a good chance of catching the fish.

If we report a point estimate, we probably will not hit the exact population parameter. On the other hand, if we report a range of plausible values – a confidence interval – we have a good shot at capturing the parameter.

As we saw above, a bootstrap sample is a sample of the original sample. In the case of the medical complications data, we proceed as follows:

A bootstrap sample behaves similarly to how an actual sample from a population would behave, and we compute the point estimate of interest (here, compute \(\hat{p}_{boot}\)).

Therefore, an interval estimate for \(p\) can be produced using the \(\hat{p}_{boot}\) values themselves.

The 95% bootstrap confidence interval for the parameter \(p\) can be obtained directly using the ordered \(\hat{p}_{boot}\) values.

The 95% confidence interval is given by: (lower, upper)

We can summarize the bootstrap process as follows:

Table 12.1 is another look at the Bootstrap process summary.

Answers to odd numbered exercises can be found in Appendix A.12.