In the Foundations of inference chapters, we have provided three different methods for statistical inference. We will continue to build on all three of the methods throughout the text, and by the end, you should have an understanding of the similarities and differences between them. Meanwhile, it is important to note that the methods are designed to mimic variability with data, and we know that variability can come from different sources (e.g., random sampling vs. random allocation, see Figure 2.8). In Table 15.1, we have summarized some of the ways the inferential procedures feature specific sources of variability. We hope that you refer back to the table often as you dive more deeply into inferential ideas in future chapters.

You might have noticed that the word distribution is used throughout this part (and will continue to be used in future chapters). A distribution always describes variability, but sometimes it is worth reflecting on what is varying. Typically the distribution either describes how the observations vary or how a statistic varies. But even when describing how a statistic varies, there is a further consideration with respect to the study design, e.g., does the statistic vary from random sample to random sample or does it vary from random allocation to random allocation? The methods presented in this text (and used in science generally) are typically used interchangeably across ideas of random samples or random allocations of the treatment. Often, the two different analysis methods will give equivalent conclusions. The most important thing to consider is how to contextualize the conclusion in terms of the problem. See Figure 2.8 to confirm that your conclusions are appropriate.

In this case study, we consider a new malaria vaccine called PfSPZ. In the malaria study, volunteer patients were randomized into one of two experiment groups: 14 patients received an experimental vaccine and 6 patients received a placebo vaccine. Nineteen weeks later, all 20 patients were exposed to a drug-sensitive malaria virus strain; the motivation of using a drug-sensitive strain of virus here is for ethical considerations, allowing any infections to be treated effectively.

The malaria data can be found in the openintro R package.

Is this an observational study or an experiment? What implications does the study type have on what can be inferred from the results?158

In this study, a smaller proportion of patients who received the vaccine showed signs of an infection (35.7% versus 100%). However, the sample is very small, and it is unclear whether the difference provides convincing evidence that the vaccine is effective.

Statisticians and data scientists are sometimes called upon to evaluate the strength of evidence. When looking at the rates of infection for patients in the two groups in this study, what comes to mind as we try to determine whether the data show convincing evidence of a real difference?

The observed infection rates (35.7% for the treatment group versus 100% for the control group) suggest the vaccine may be effective. However, we cannot be sure if the observed difference represents the vaccine’s efficacy or if there is no treatment effect and the observed difference is just from random chance. Generally there is a little bit of fluctuation in sample data, and we wouldn’t expect the sample proportions to be exactly equal, even if the truth was that the infection rates were independent of getting the vaccine. Additionally, with such small samples, perhaps it’s common to observe such large differences when we randomly split a group due to chance alone!

This example is a reminder that the observed outcomes in the data sample may not perfectly reflect the true relationships between variables since there is random noise. While the observed difference in rates of infection is large, the sample size for the study is small, making it unclear if this observed difference represents efficacy of the vaccine or whether it is simply due to chance. We label these two competing claims, \(H_0\) and \(H_A\):

Now consider the alternative model: infection rates were influenced by whether a patient received the vaccine or not. If this was true, and especially if this influence was substantial, we would expect to see some difference in the infection rates of patients in the groups.

We choose between these two competing claims by assessing if the data conflict so much with \(H_0\) that the independence model cannot be deemed reasonable. If this is the case, and the data support \(H_A,\) then we will reject the notion of independence and conclude the vaccine was effective.

We’re going to implement simulation under the setting where we will pretend we know that the malaria vaccine being tested does not work. Ultimately, we want to understand if the large difference we observed in the data is common in these simulations that represent independence. If it is common, then maybe the difference we observed was purely due to chance. If it is very uncommon, then the possibility that the vaccine was helpful seems more plausible.

Table 15.2 shows that 11 patients developed infections and 9 did not. For our simulation, we will suppose the infections were independent of the vaccine and we were able to rewind back to when the researchers randomized the patients in the study. If we happened to randomize the patients differently, we may get a different result in this hypothetical world where the vaccine does not influence the infection. Let’s complete another randomization using a simulation.

In this simulation, we take 20 notecards to represent the 20 patients, where we write down “infection” on 11 cards and “no infection” on 9 cards. In this hypothetical world, we believe each patient that got an infection was going to get it regardless of which group they were in, so let’s see what happens if we randomly assign the patients to the treatment and control groups again. We thoroughly shuffle the notecards and deal 14 into a pile and 6 into a pile. Finally, we tabulate the results, which are shown in Table 15.3.

How does this compare to the observed 64.3% difference in the actual data?159

15.2.3 Independence between treatment and outcome

We computed one possible difference under the independence model in the previous Guided Practice, which represents one difference due to chance, assuming there is no vaccine effect. While in this first simulation, we physically dealt out notecards to represent the patients, it is more efficient to perform the simulation using a computer.

And so on until we repeat the simulation enough times to create a distribution of differences that could have occurred if the null hypothesis was true.

Figure 15.1 shows a stacked plot of the differences found from 100 simulations, where each dot represents a simulated difference between the infection rates (control rate minus treatment rate). 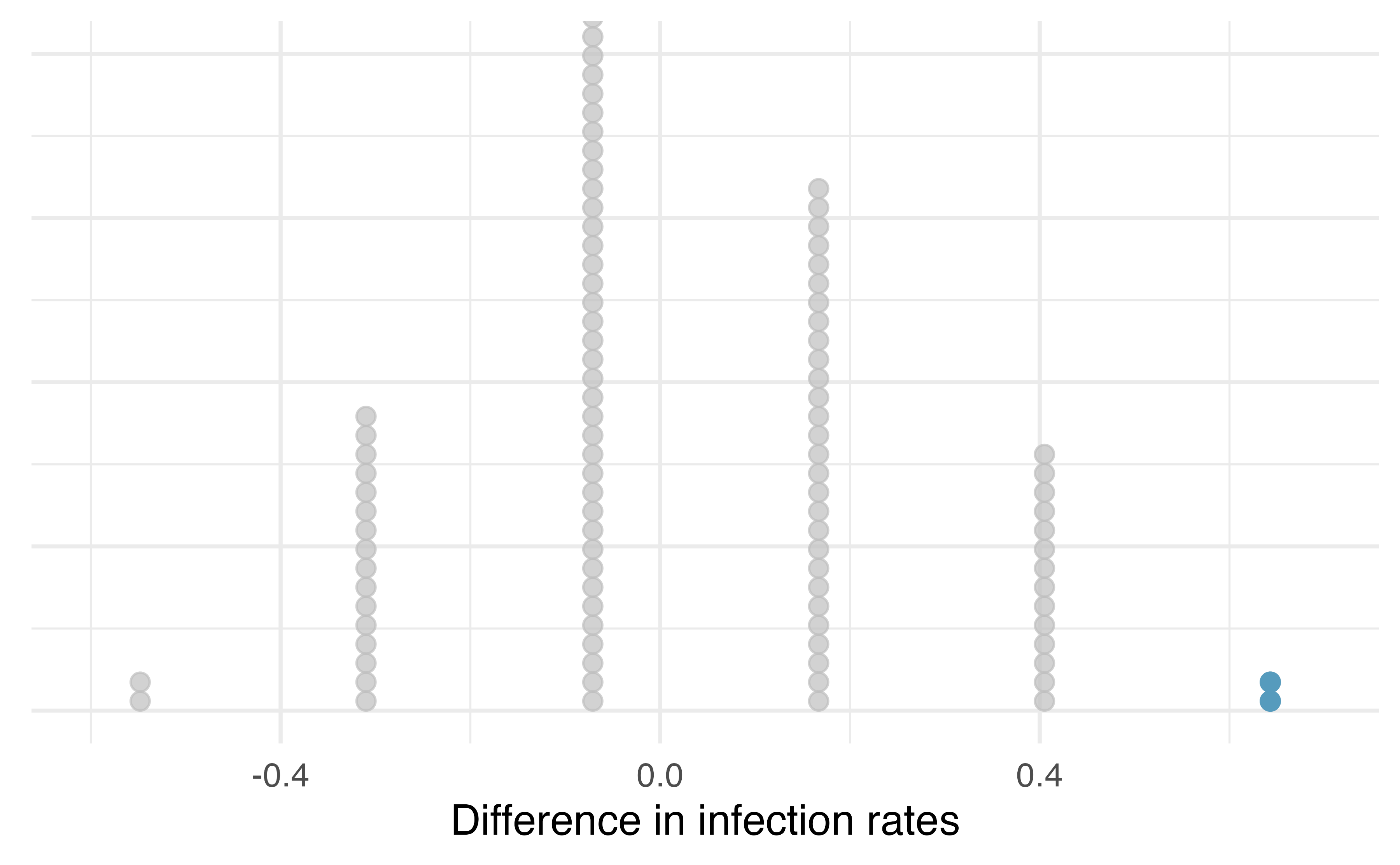 Note that the distribution of these simulated differences is centered around 0. We simulated these differences assuming that the independence model was true, and under this condition, we expect the difference to be near zero with some random fluctuation, where near is pretty generous in this case since the sample sizes are so small in this study.

It appears that a difference of at least 64.3% due to chance alone would only happen about 2% of the time according to Figure 15.1. Such a low probability indicates a rare event.

The difference of 64.3% being a rare event suggests two possible interpretations of the results of the study:

Based on the simulations, we have two options. (1) We conclude that the study results do not provide strong evidence against the independence model. That is, we do not have sufficiently strong evidence to conclude the vaccine had an effect in this clinical setting. (2) We conclude the evidence is sufficiently strong to reject \(H_0\) and assert that the vaccine was useful. When we conduct formal studies, usually we reject the notion that we just happened to observe a rare event. So in the vaccine case, we reject the independence model in favor of the alternative. That is, we are concluding the data provide strong evidence that the vaccine provides some protection against malaria in this clinical setting.

Sampling distributions - Does science benefit you?