Take a walk around your neighborhood and you’ll probably see a few houses for sale. If you find a house for sale, you can probably go online and look up its price. You’ll quickly note that the prices seem a bit arbitrary – the homeowners get to decide what the amount they want to list their house for, and many criteria factor into this decision, e.g., what do comparable houses (“comps” in real estate speak) sell for, how quickly they need to sell the house, etc.

In this case study we’ll formalize the process of figuring out how much to list a house for by using data on current home sales In November of 2020, information on 98 houses in the Duke Forest neighborhood of Durham, NC were scraped from Zillow. The homes were all recently sold at the time of data collection, and the goal of the project was to build a model for predicting the sale price based on a particular home’s characteristics. The first four homes are shown in Table 10.1, and descriptions for each variable are shown in Table 10.2.

The duke_forest data can be found in the openintro R package.

As mentioned, the goal of the data collection was to build a model for the sale price of homes. While using multiple predictor variables is likely preferable to using only one variable, we start by learning about the variables themselves and their relationship to price. Figure 10.1 shows scatterplots describing price as a function of each of the predictor variables. All of the variables seem to be positively associated with price (higher values of the variable are matched with higher price values). 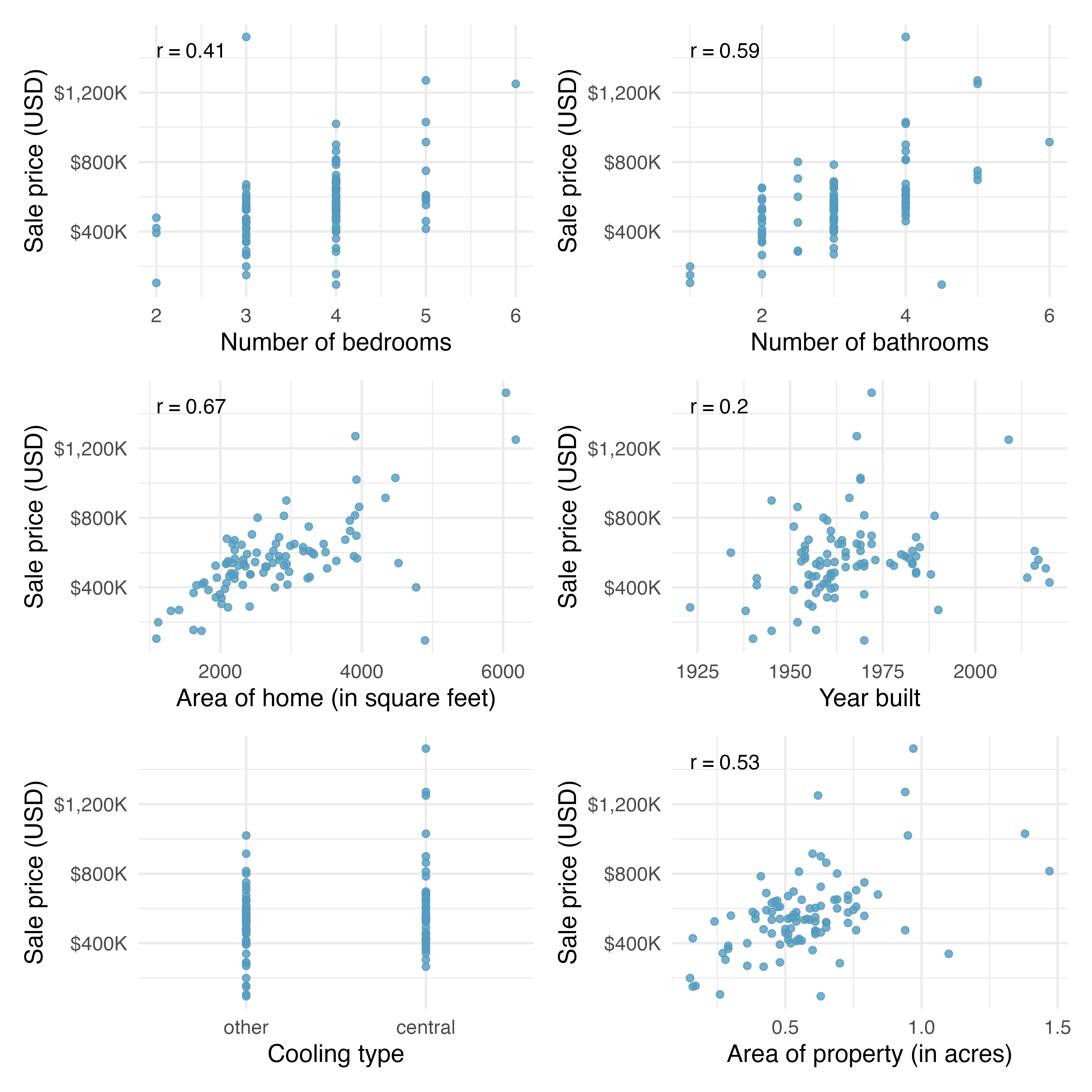 In Figure 10.1 there does not appear to be a correlation value calculated for the predictor variable, cooling. Why not? Can the variable still be used in the linear model? Explain.115

In Figure 10.1 which variable seems to be most informative for predicting house price? Provide two reasons for your answer.

A linear model was fit to predict price from area. The resulting model information is given in Table 10.3.

Using the output in Table 10.3, write out the model for predicting price from area.117 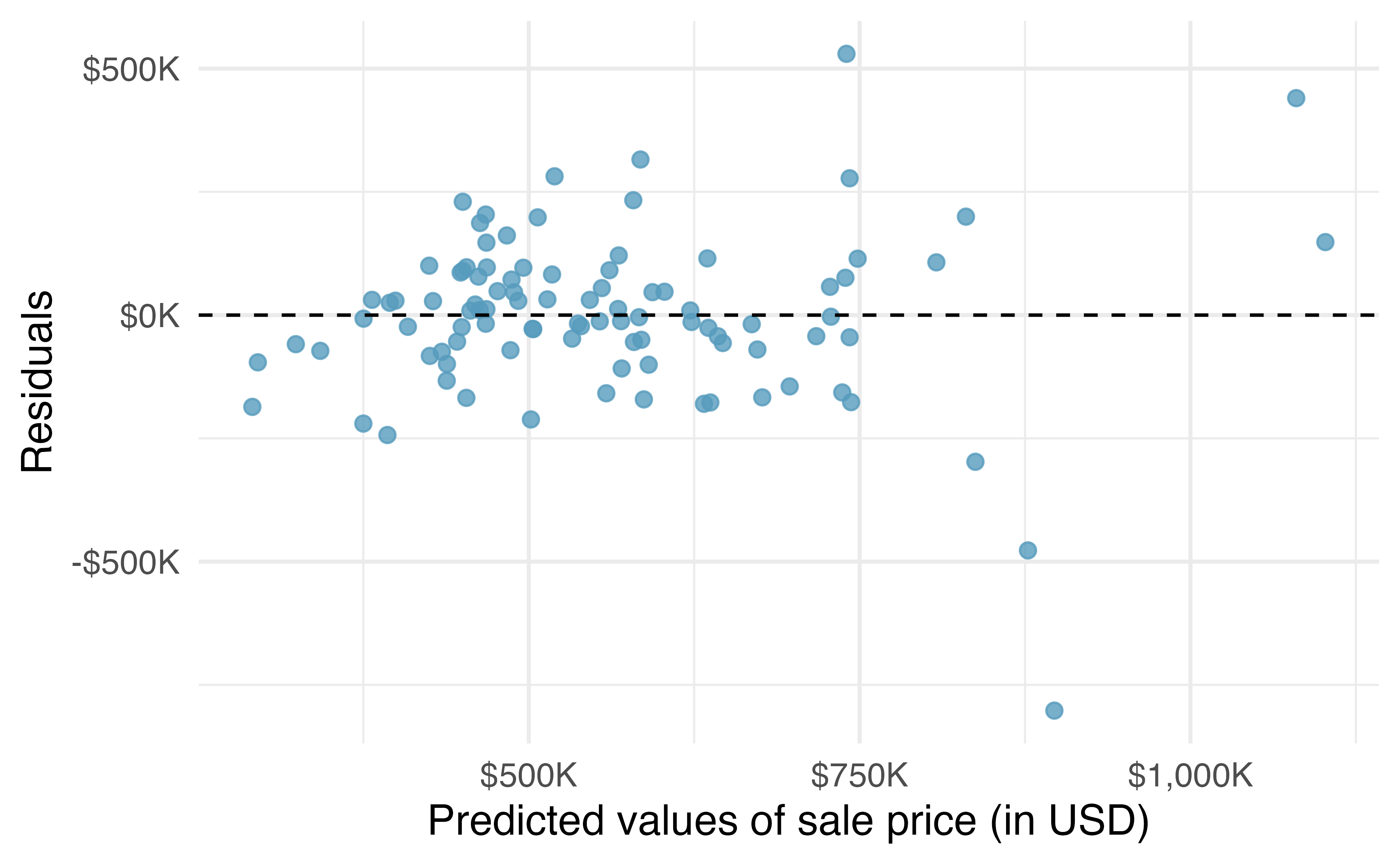 Figure 10.2: Residuals versus predicted values for the model predicting sale price from area of home.

It seems as though the predictions of home price might be more accurate if more than one predictor variable was used in the linear model. Table 10.4 displays the output from a linear model of price regressed on area, bed, bath, year_built, cooling, and lot.

Using Table 10.4, write out the linear model of price on the six predictor variables.

A friend suggests that maybe you do not need all six variables to have a good model for price. You consider taking a variable out, but you aren’t sure which one to remove.

Results corresponding to the full model for the housing data are shown in Table 10.4. How should we proceed under the backward elimination strategy?

Since we eliminated a predictor from the model in the first step, we see whether we should eliminate any additional predictors. Our baseline adjusted \(R^2\) is now 0.593. We fit another set of new models, which consider eliminating each of the remaining predictors in addition to bed:

None of these models lead to an improvement in adjusted \(R^2\), so we do not eliminate any of the remaining predictors.

That is, after backward elimination, we are left with the model that keeps all predictors except bed, which we can summarize using the coefficients from Table 10.5.

Then, the linear model for predicting sale price based on this model is as follows:

The residuals, for the most part, are randomly scattered around 0. However, there is one extreme outlier with a residual of -$750,000, a house whose actual sale price is a lot lower than its predicted price. Also, we observe again that the residuals are quite large for expensive homes. 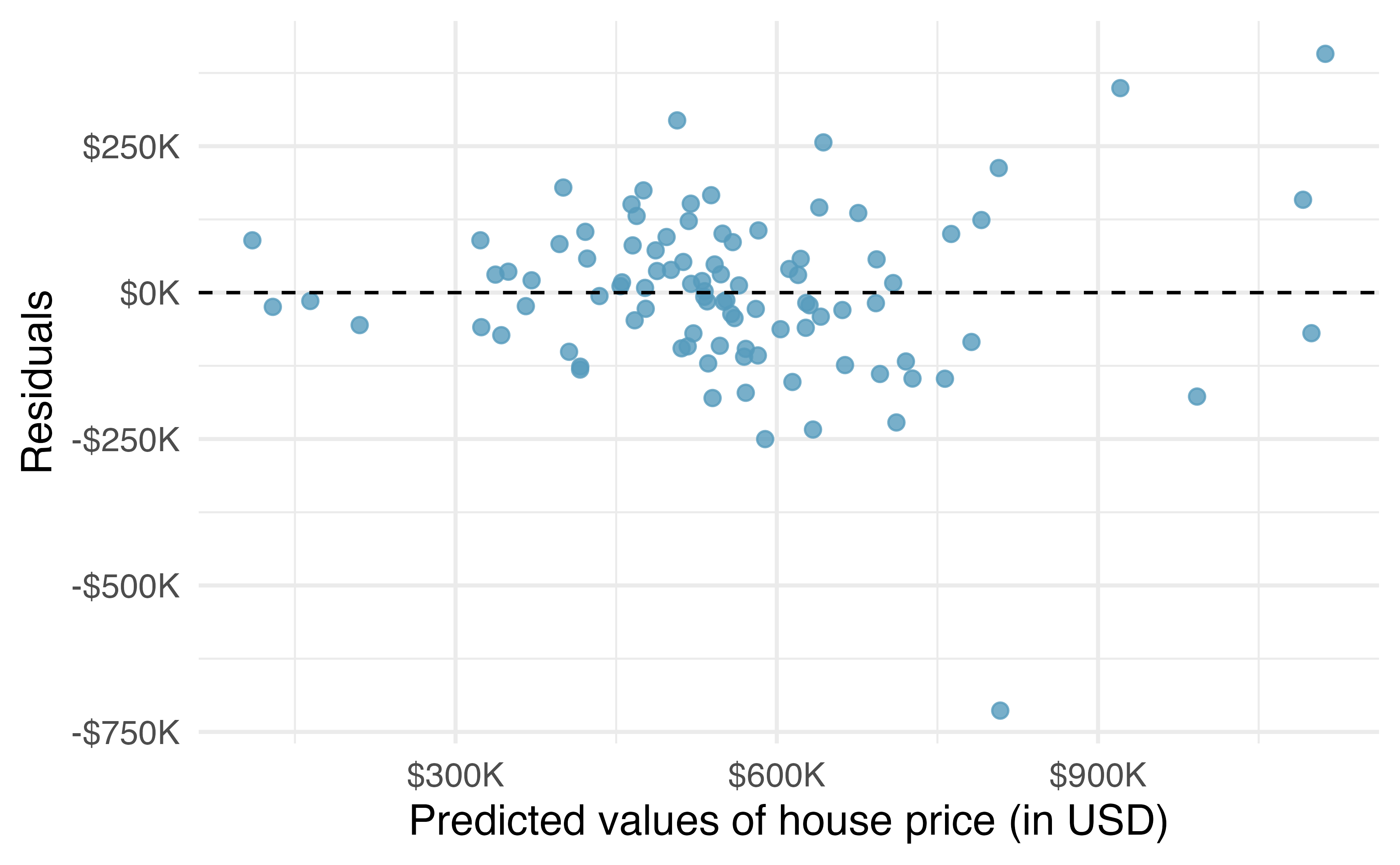 Figure 10.3: Residuals versus predicted values for the model predicting sale price from all predictors except for number of bedrooms.